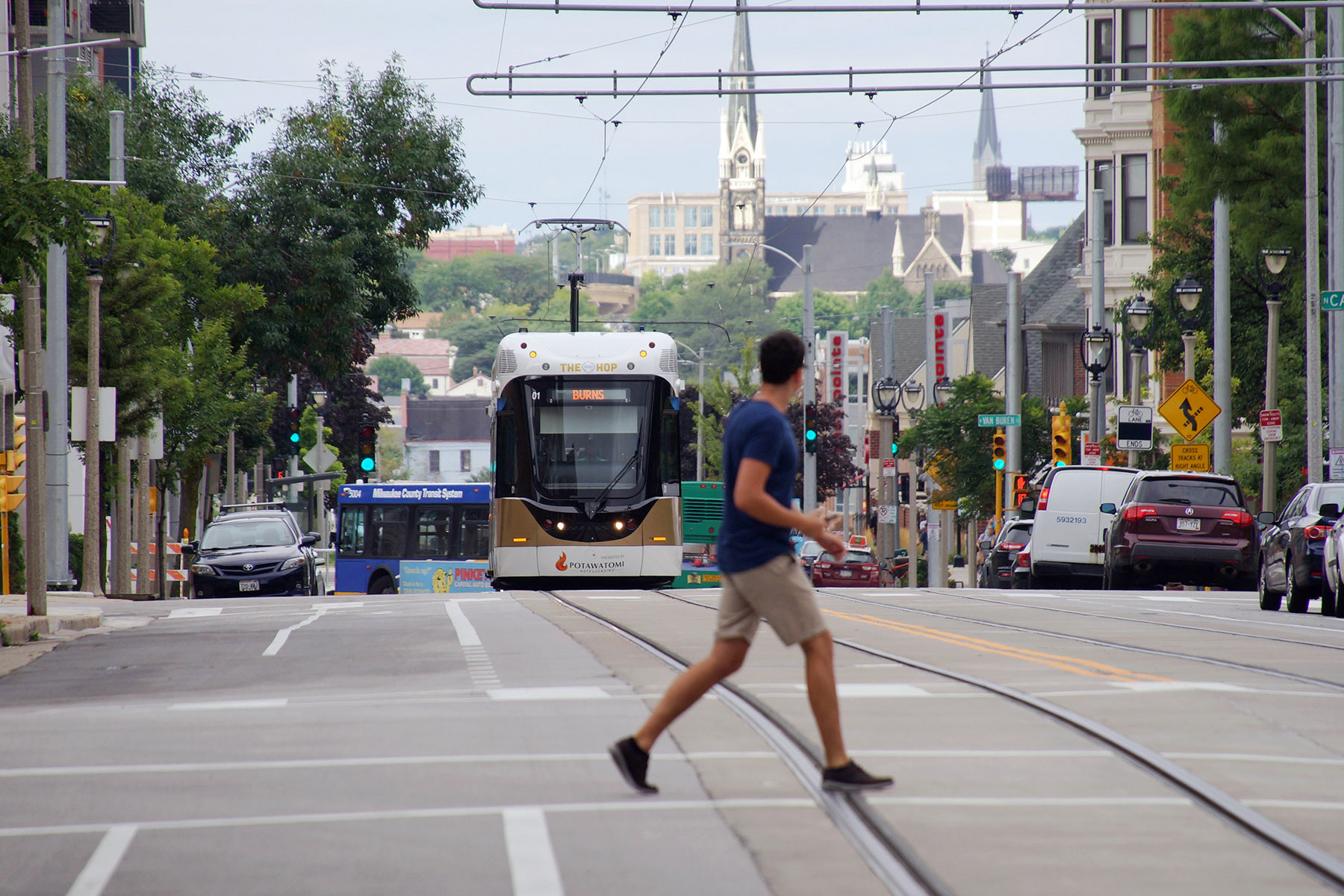 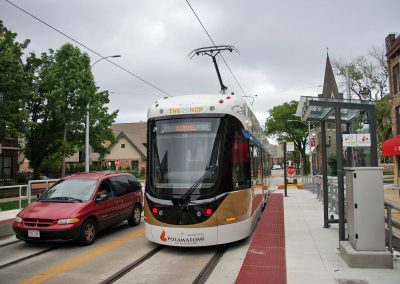 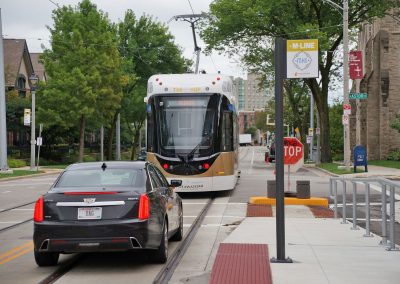 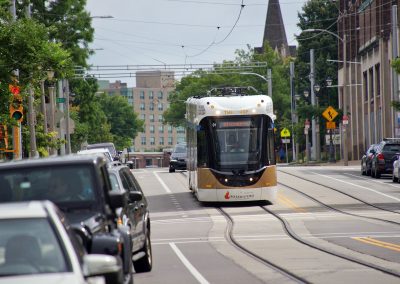 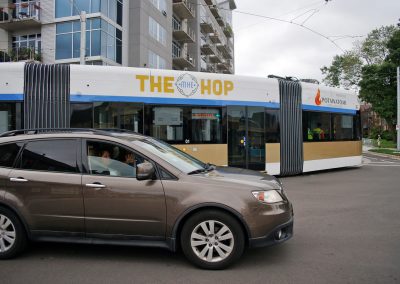 In 1945, at the end of WW II, Milwaukee had 350 miles of streetcar lines and 198 miles of interurban electric trains that served Burlington, East Troy, Waukesha and Sheboygan. In addition passenger trains connected to Madison, Green Bay, Chicago and beyond. There were over 80 round trips to Chicago provided by the Milwaukee Road, the Northwestern RR and the electric North Shore Line. In addition there were 110 miles of electric bus lines run by the Milwaukee Transit Lines. All of this service was privately-owned and paid substantial state and local taxes.

In the post-war era, the US government spent huge sums on road building and zero on transit and trains. The State of Wisconsin likewise concentrated dollars on road building. By 1956 the Feds contributed 90% to the Interstate highways while states contributed 10%. Cities need not pay anything.

In the rest of the developed world, moneys were spent in a more balanced way on transit, trains and roads. In the US. government transportation dollars were spent almost exclusively on highways. In America, between subsidies to road building and taxes paid by transit and passenger railroads. the incentive was to shut down transit and train facilities.

In Milwaukee all streetcars, interurbans and electric buses were gone by 1964.

By the mid-1970s, the main north-south and east-west freeways were built. I-94 from Marquette to 100th Street was built over the Interurban right of way that once connected the western suburbs with downtown.

The freeways had huge impacts on land use. Retail spread away from the city. Downtown, which had been the #1 retail district in the state fell out of the top 10 by 1980. North 3rd Street (now King Drive) had been #2 and by 1980 was not even in the top 40. While not the only factor, removing quality transit and installing high speed highways did not add value to Milwaukee.

By contrast, most West European cities and some in Canada (Vancouver and Winnipeg) have no freeways inside their city boundaries and have thriving neighborhoods and downtowns.

More people are coming to realize that big roads disrupt the complex economic and social structure of cities while transit adds value. Freeway removals are becoming more common. Paris, France had only one freeway segment which was removed last year. Seoul, South Korea has removed 13 segments of freeway in the last 10 years. Seoul has a vast rail transit network and one of the strongest economies in Asia.

Later the Federal government did start putting relatively small amounts into transit while still allocating most of its transportation money for big road projects. Now, because the Congress failed to raise the gas tax, Federal revenue covers only a small portion of road costs and an even smaller proportion of transit. Now states and particularly cities are increasingly on their own. Hence when spending what money they have, they should spend it on infrastructure that adds value.

For large and medium size cities that means maintaining street grids and sidewalks, expanding transit and facilitating biking. Cities like Portland, Dallas, Charlotte, Atlanta, Seattle, Salt Lake City and dozens of others have built rail transit lines. No city that has streetcars or other rail facilities are contemplating removing them.

Kаnsаs City, a city with less population density than Milwaukee, recently built a streetcar line which has become quite popular and successful.

I support the Milwaukee Streetcar. It begins the restoration of a system that served Milwaukee’s people and property during the period of the city’s greatest prosperity and growth.

I would also support expansion of passenger train service (the Milwaukee-Mad City High Speed Train was a great idea). I would also support Light Rail (same as streetcar only on its own right of way), electric bus or BRT. They would all add value to Milwaukee unlike the freeways which damaged the city badly and unnecessarily.

If the billions of dollars spent expanding the Marquette and Zoo interchanges had been spent on transit, Milwaukee would be much more likely to have added tax revenue to support and expand city services.

John O. Norquist was Mayor of Milwaukee from 1988 to 2004. I worked for him as Deputy Director of the Department of Administration, and Mayoral Policy Director and Chief of Staff. He also served as President and CEO of the Chicago-based Congress for the New Urbanism. 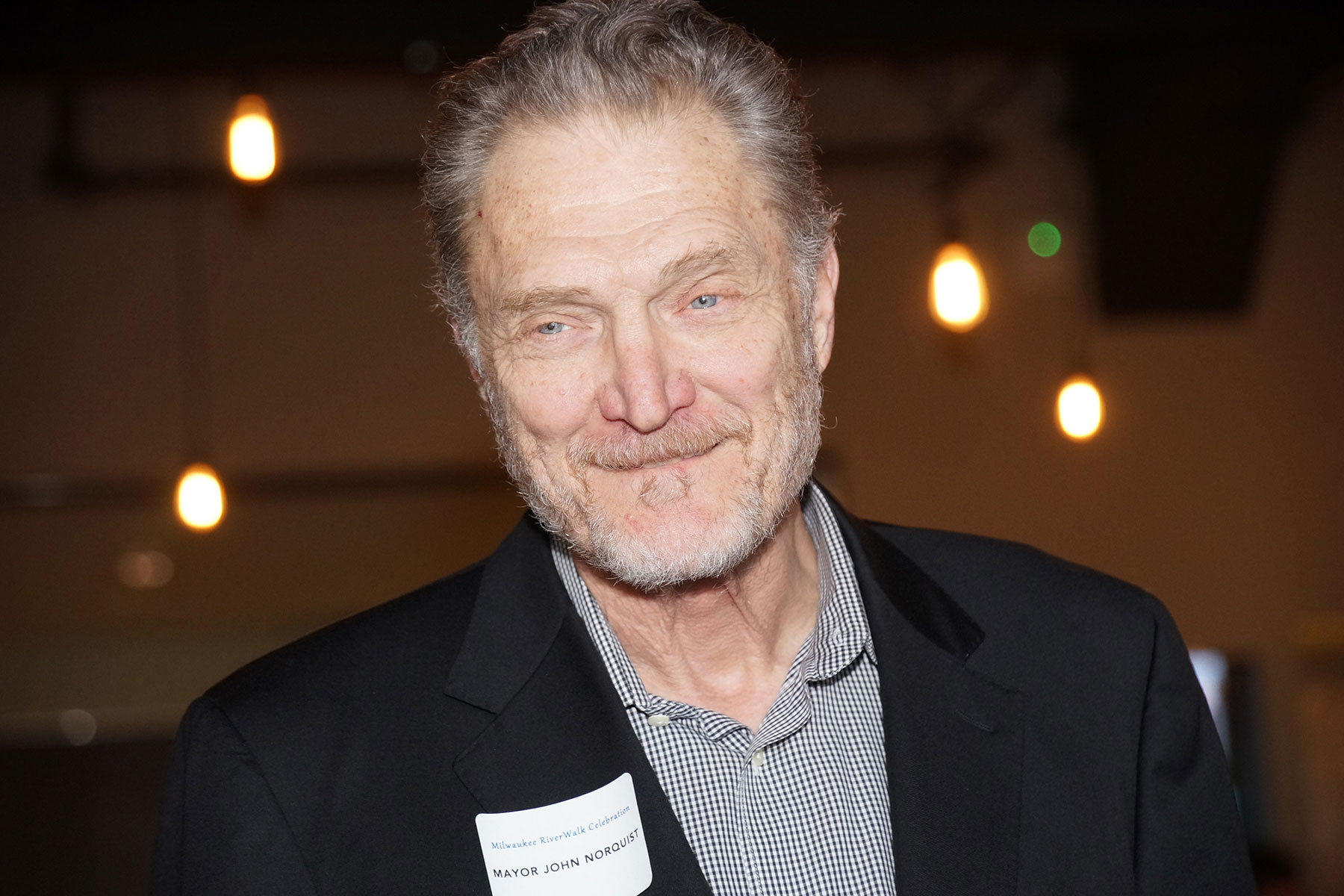 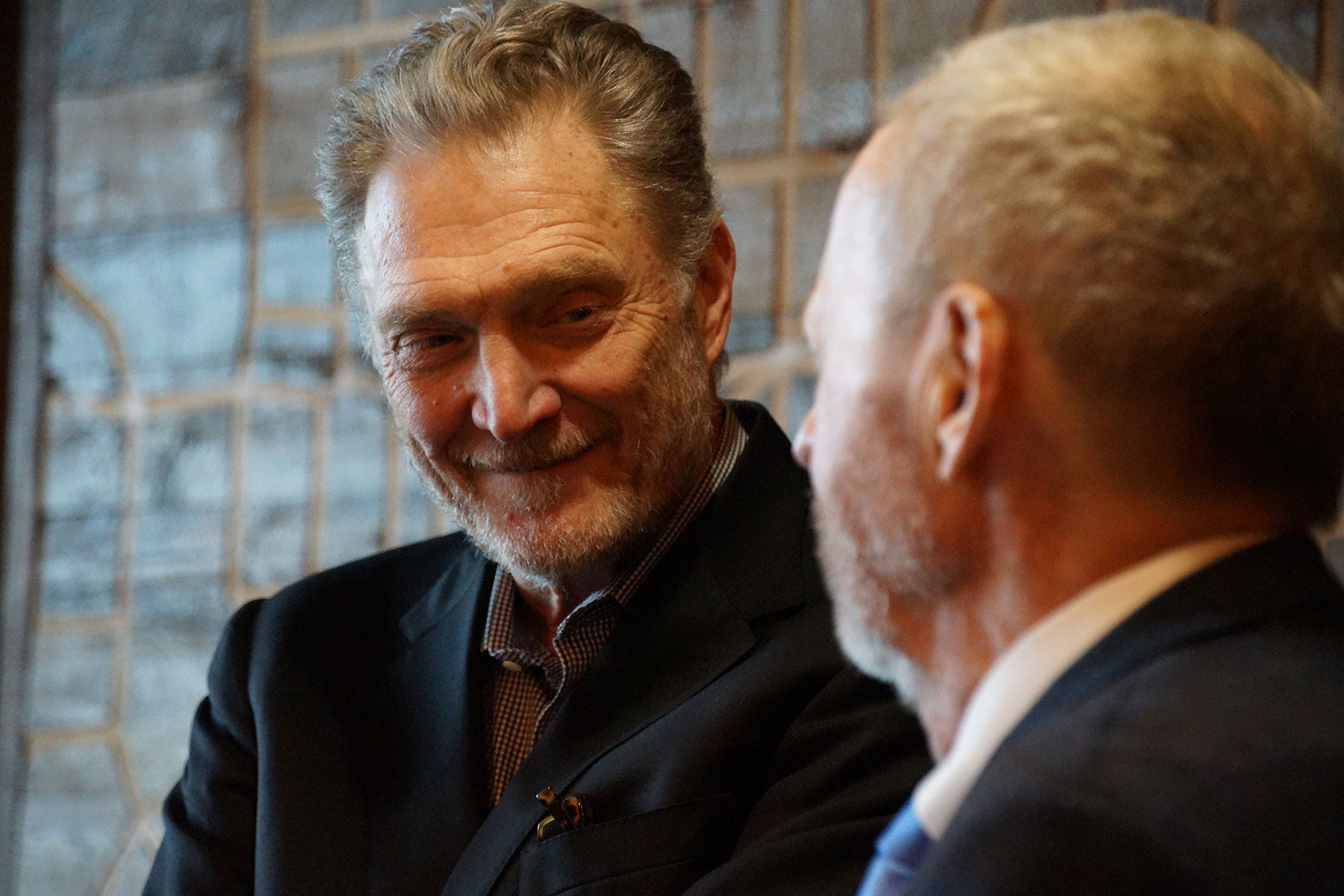 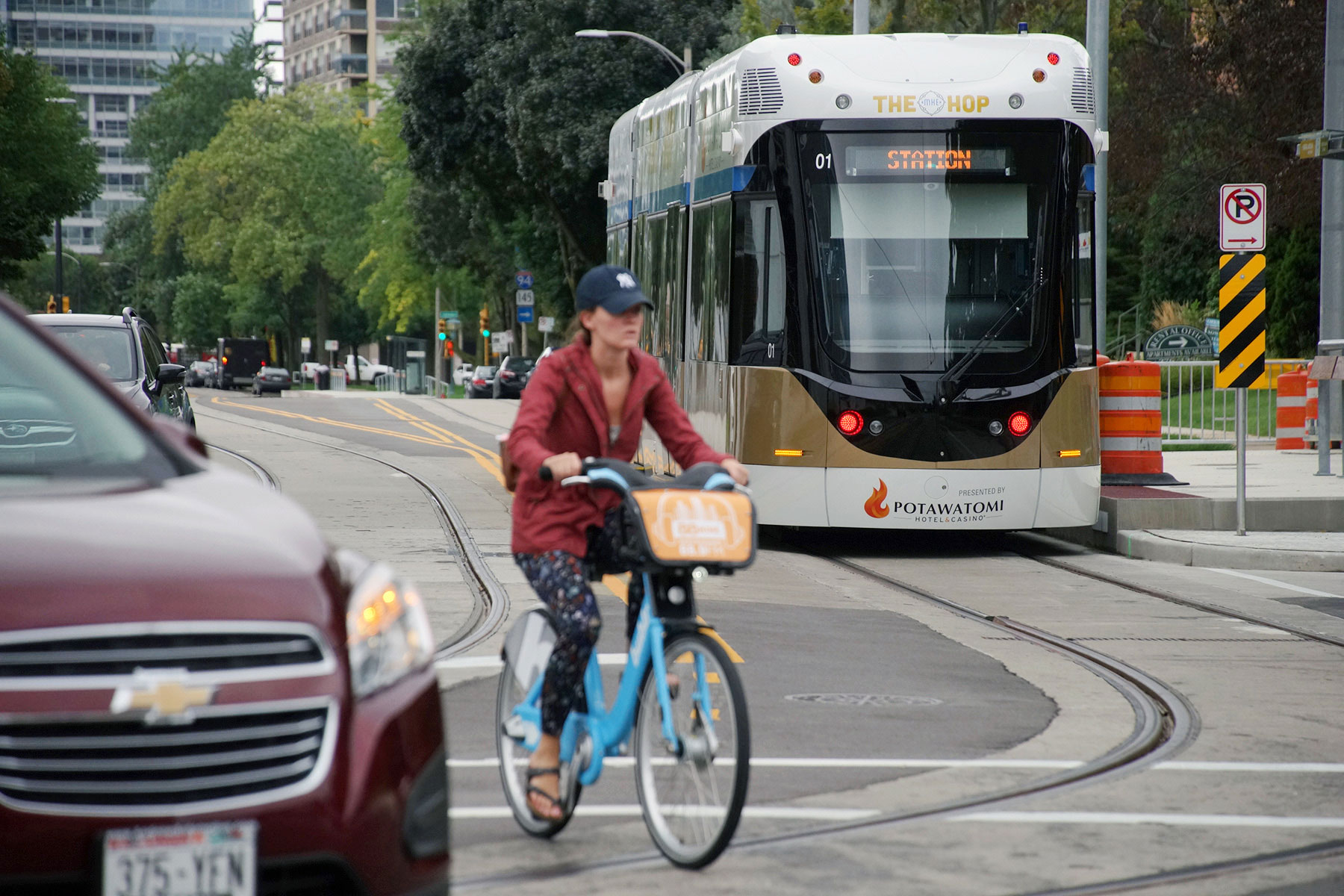 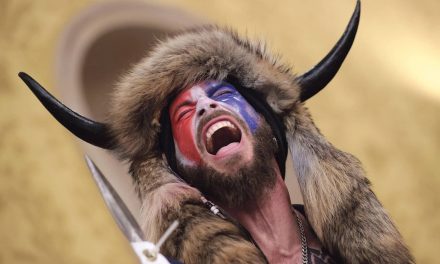 The luxury of opposition: Why Republicans beat a “culture war” drum instead of offering solutions 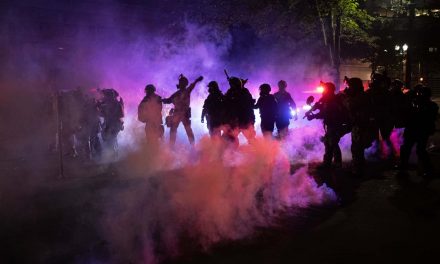 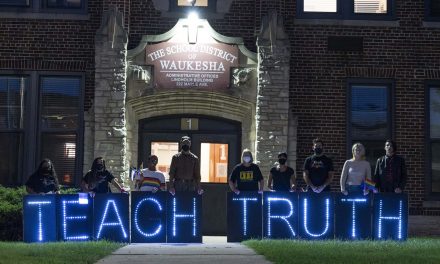 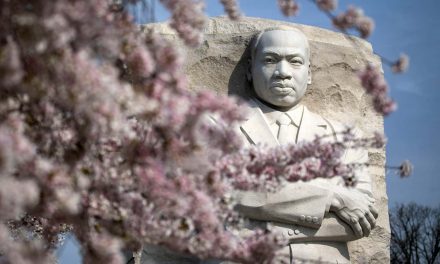