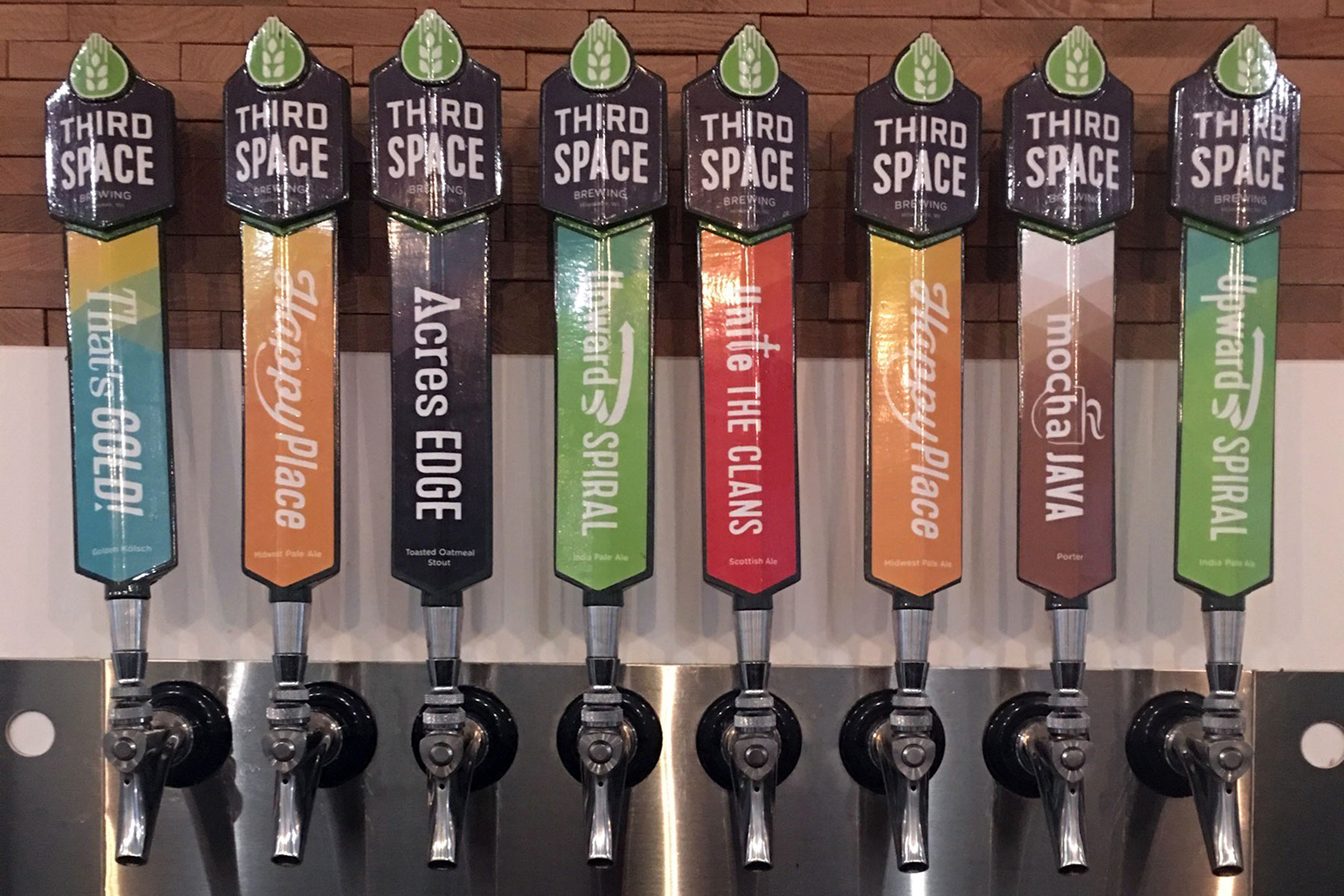 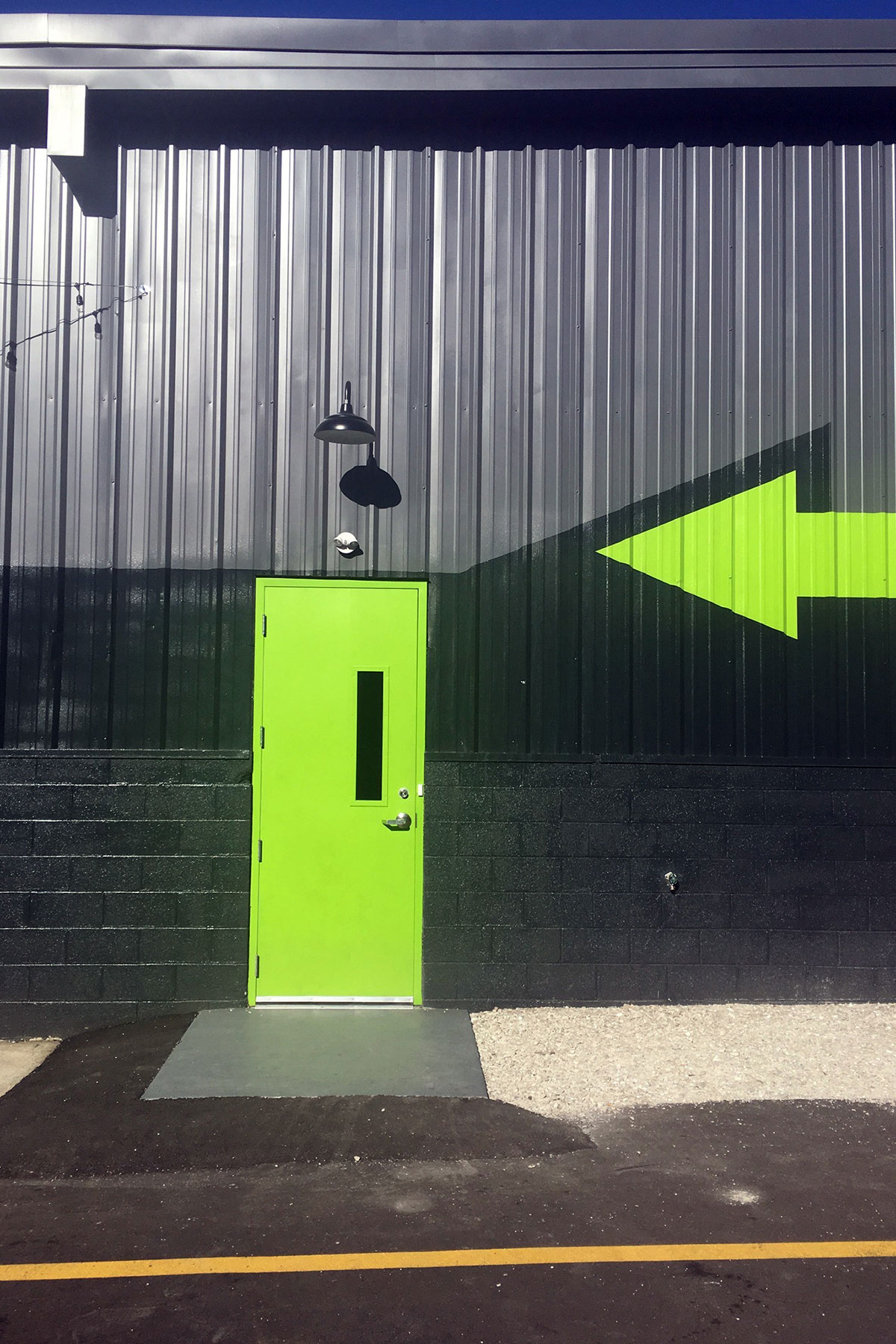 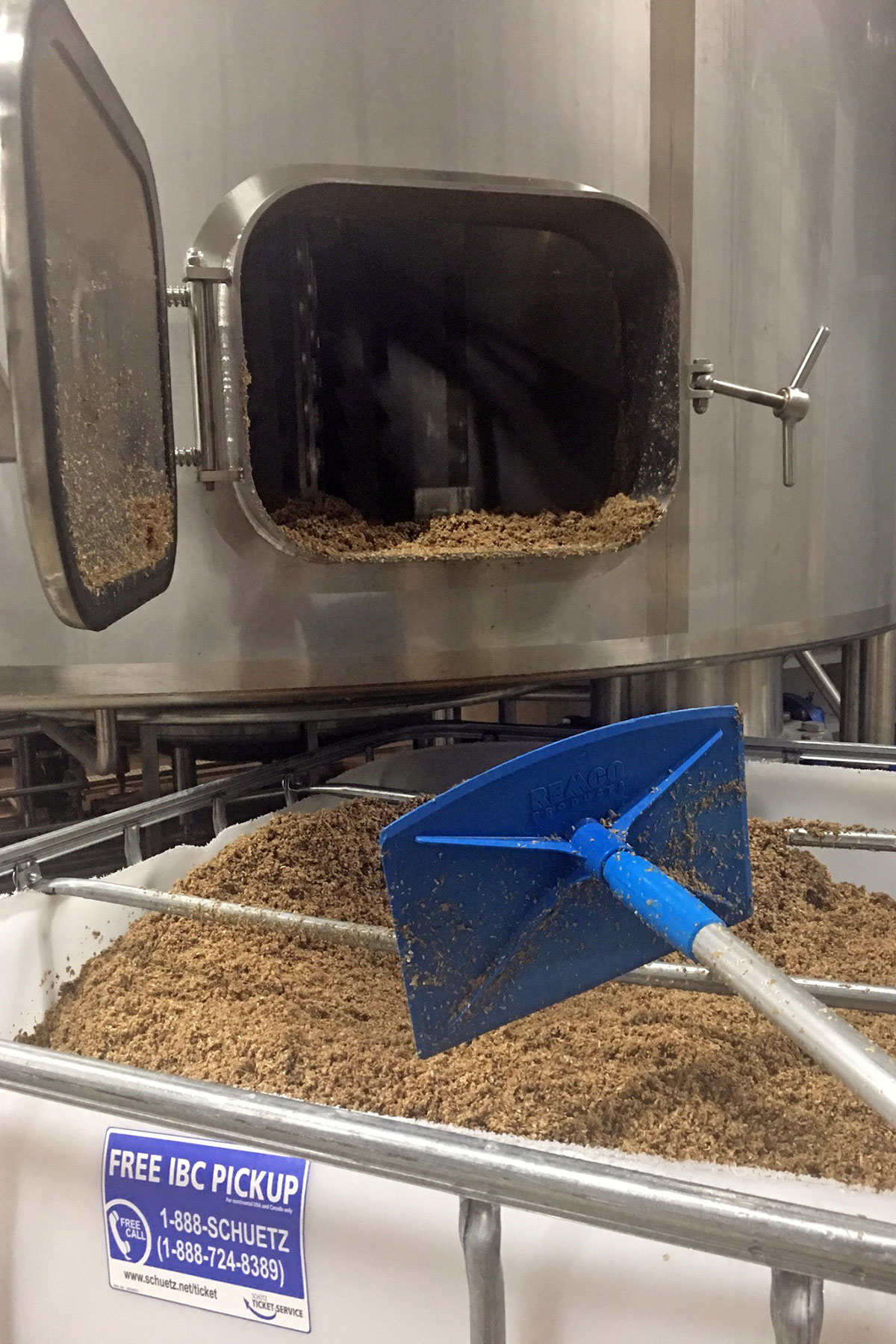 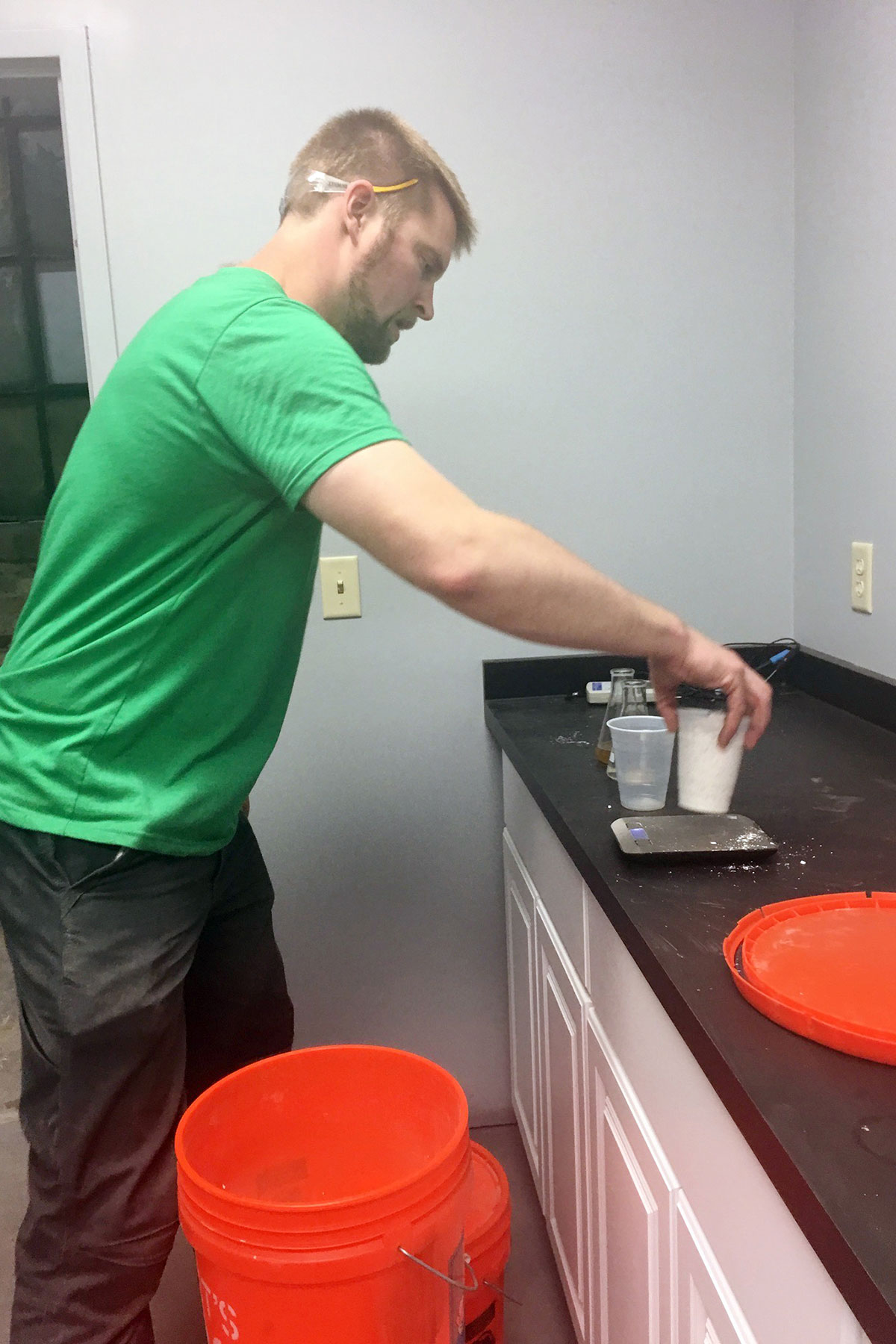 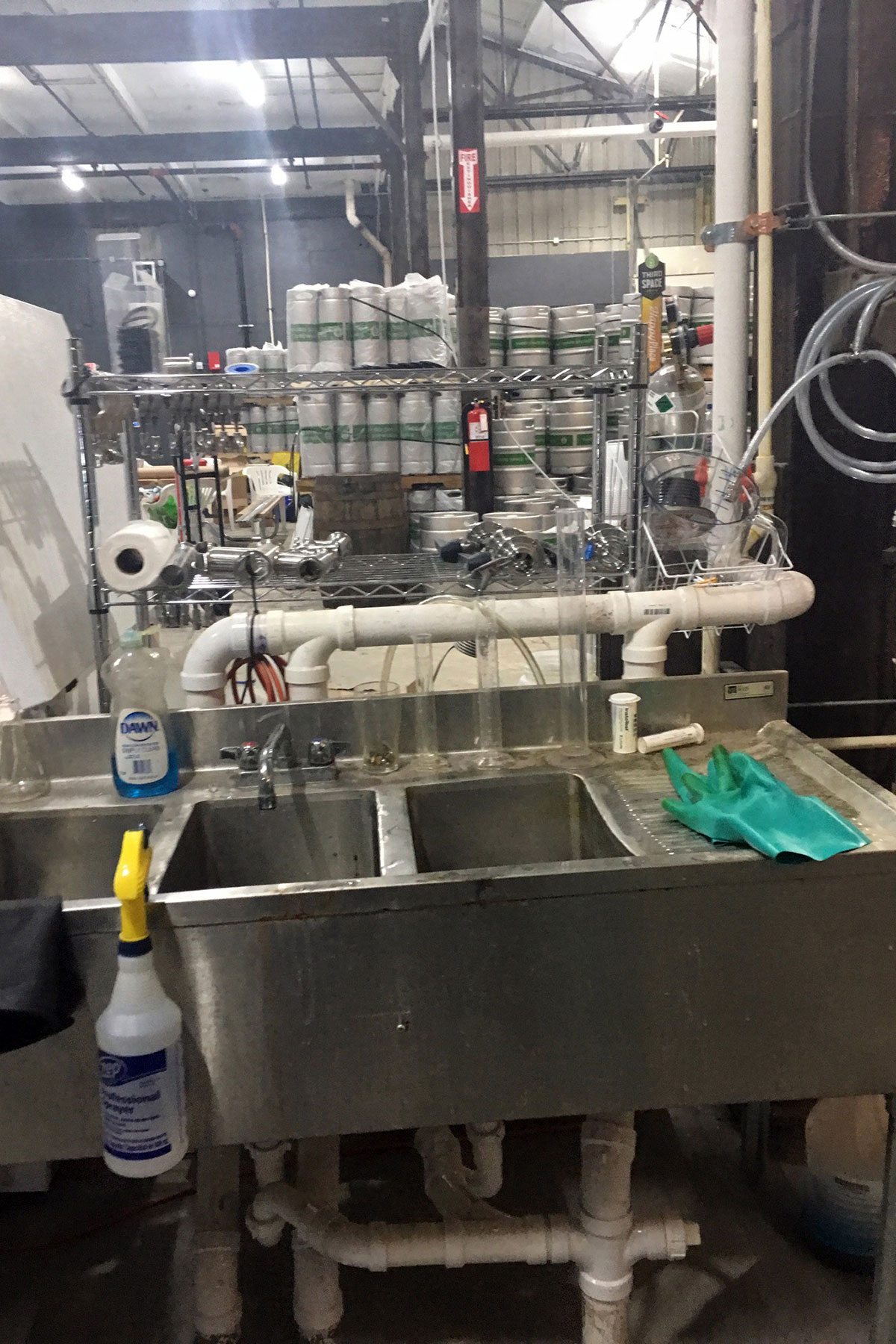 When I arrive at 1505 W. St. Paul, I first follow the malty scent of freshly mashed beer, then a series of huge green arrows painted on the outside of the brewery, which lead me to a chartreuse door. Behind the door, I find Third Space Brewing’s Head Brewer and co-owner, Kevin Wright, alone with his work.

The hum of Kevin’s massive brew kettle and the caramel aroma of boiling wort fill the cavernous brewhouse, which is crisscrossed by heavy tubes used to transfer beer and water around the stainless steel tanks towering on the south wall of the space. The rest of the brewery is filled with pallets of kegs, a set of utility sinks, and what may be a temporary desk set up on a plywood box.

Maybe it’s just because I’m a massive beer geek, but there’s something magical about this experience: a solitary brewer performing a kind of everyday alchemy, using only his wits and his bare hands to transform hops, water, yeast, and malted grain into liquid gold beer. For a moment the spell lingers, breaking only when Kevin calls to me from a tall metal platform standing between his mash tun and boil kettle, “Hey man!”

Tall, with short, blond hair, Kevin wears a t-shirt and jeans with clear safety glasses on the back of his head. He is in the midst of brewing, and during our conversation he almost never stops moving, except to look at me when emphasizing a point or to make sure I understand. As we talk, I come to see Kevin as both scientist and artist, consumer and designer. He is both a down-to-earth Milwaukee-native and an award-winning brewer who worked at one of the fastest growing breweries in the U.S., Hangar 24, as part of a team that won gold medals from both the GABF and the World Beer Cup.

This last detail is something Kevin never mentions to me. For all the hype surrounding craft beer, brewing is a craft and Kevin a craftsman, someone who, I think, prefers to let his beer speak for itself. Like many crafts, brewing beer takes hours of hard work and high energy, but throughout our two-hour interview, Kevin never looks stressed or tired or harried. You could be forgiven for wondering why (after all, who needs someone looking over their shoulder as they work) but the answer is simple: Kevin Wright loves brewing beer.

The origin of that love is simple yet profound, much like Kevin himself. When I ask him about the beer that started his journey to becoming a brewer and brewery owner, Kevin instead talks about an experience, his “first great beer moment.” While visiting the woman who would become his wife as she studied abroad in Munich, Kevin wandered into a beer garden one rainy afternoon and ordered a Hefeweizen. Surrounded by locals, Kevin tells me he remembers sipping and thinking, “This is the greatest thing ever: awesome beer, awesome culture.”

As a gateway moment that began Kevin’s origin story, that afternoon in Munich is certainly significant, yet, this “beer experience,” as Kevin calls it, is more than just a beginning, it is the foundation of his brewing philosophy. Kevin strives to brew beers that create moments. As he explains, “beer is about experience.”

One part of experience is the sense a place creates, and Kevin and co-owner, Andy Gehl, designed Third Space’s brewhouse and taproom with an awareness of how place plays a role in creating experiences.

Only a low wall separates the taproom from the brewery, inviting you to drink a flight as you overlook 30 BBLS of fermenting beer. The taproom itself echoes Milwaukee’s industrial and brewing history, preserving the sense of an open warehouse, yet filling it with more seating than any other taproom in the city. Dozens of tables are built from repurposed carts Kevin and Andy found in the brewery while it was being remodeled. Reminiscent of a German beer hall, the brewery’s design is true to it’s name, creating a third space, a communal gathering place that invites the kind of open-ended lingering and leisurely conversations commonly associated with European culture.

But the better part of our experience drinking beer is flavor. Flavor is the soul of beer, the art behind the craft, the heart behind the science. In this sense, I think one way to understand how Kevin’s beers work is to think of the flavors they create as another kind of third space. Flavor can create moments which transport us outside our daily lives into experiences suggested by the beer. Upward Spiral is a vibrant IPA that tastes of bright California afternoons, while That’s Gold!, delicately balances malt and noble hops to evoke Milwaukee’s German brewing history. Both stimulating and intoxicating, Mocha Java Porter is a beer for Milwaukee’s 21st Century working class: hard-working and educated, rooted in the past, yet complex enough to engage a modern palate.

The Science of Flavor

As beer drinkers we often take for granted the end-result of a brewer’s craft, but as I watch Kevin brew, and listen to him talk about brewing, I realize that creating flavor experiences is both a science and an incredibly intricate art in which palate and process drive each other. Watching Kevin brew is a little like watching a scientist work. He cleans and sanitizes every surface, measures every ingredient, times every phase of the process. He even has a microscope and a small lab in the back of his brewery. Yet all that science isn’t soulless. It’s science which drives a precise art in which every flavor of the beer works as it’s designed to. It’s only when Kevin explains to me “you have to have the science to support the art and the art to support the science,” that I begin to understand what makes him tick as a brewer.

There’s no better place to examine how this dynamic plays out than the flavor of beer.

“You can tell a lot by how beer tastes,” Kevin tells me. In every sip of the beer he brews, Kevin can taste some aspect of his process. And as I learned, regular, rigorous tasting of his beer, allows him to continuously refine and perfect his brewing. It started at UC-Davis, where Kevin completed the Master Brewer Program degree in 2009, then became a regular part of his brewing process when he instituted a tasting program as Head Brewer at Hangar 24.

“At Davis we did sensory every Friday,” Kevin explains, detailing a program in which he and his fellow students would taste beers that had been dosed with tablets which each tasted like a different off-flavor in beer. For example, one of the dozens of off-flavors that Kevin and his classmates learned to identify is acetaldehyde, which tastes a bit like rotten-apples, and can result from beer that needs more time to condition.

Over time, Kevin gradually reduced the dosage of the off-flavor tablets, training his palate to detect ever-smaller quantities of each flavor. Because these off-flavors each correspond to different parts of the brewing process, learning to identify them at low levels essentially enables Kevin to do his own quality control. He explains that should he “smell or taste something, that’s not what I want,” he can ask “what can I do to change either my process or my ingredients to get rid of that [off-flavor].”

It’s no wonder then that when I ask Kevin about tasting beer, he tells me, “I think that’s the most important part [of brewing]: being able to taste and identify flavors.”

The flip side of this is knowing how to produce delicious flavors — and to produce them not just once, but consistently, batch of beer after batch of beer. Consider just one factor in the flavor of beer, hops. As weather and soil conditions change from year to year, the same hop plant can produce hops with subtle variations in flavor. Likewise, variance in conditions means that hop plants of the same variety will grow hops that taste and smell differently from one farm to the next, or even from one field to the next.

That means that if Kevin wants Happy Place to taste the same year after year, he may sometimes have to tweak a recipe or brew slightly differently. It could also mean visiting hop suppliers to evaluate the hops he’s buying. Kevin explains, “you get four to ten lots of a certain hop variety,” then “you smell it, you rub it together, and you pick your lot for that harvest year.” While that certainly sounds like heaven for a hop-head like Kevin, it’s also incredibly challenging because “you’re looking to match the flavor profile you’re going for. And so you don’t always pick your favorite [lot of hops] every year because you’re looking for consistency, not the flavor.”

Now here is where things get mind-boggling. Hops are only a part of a finished beer, albeit a big part for some beer styles. The mineral profile of the water used to make the beer, the type and amount of yeast used, the types of malt used, the temperature the beer is fermented at, when and how the hops are added to the beer — these are only some of the variables involved in the brewing process.

Beerchemy: A Seemingly Magical Process of Transformation, Creation, or Combination of Water, Hops, Grain, and Yeast into Beer.

Kevin smiles as he says this, and as my mind reels a bit from the complexity involved in brewing, I found myself feeling again like he is a bit of an alchemist, pulling off the magic trick of making art from science, soul from technique. But of course the magician’s greatest trick is to perform so flawlessly that you never wonder what he did or how he did it, you just enjoy the experience.

Later, sipping through a flight of his beers at the taproom bar, I realize Kevin has done just that. Each beer draws me in irresistibly, subtly calling me to raise the glass again, to taste another drop of that liquid gold. And pretty soon I’ve forgotten all about PH, mash thickness, sourcing raw-materials, and hop selection.

The beer is so good, and maybe the best way to experience art like this is just to taste it. 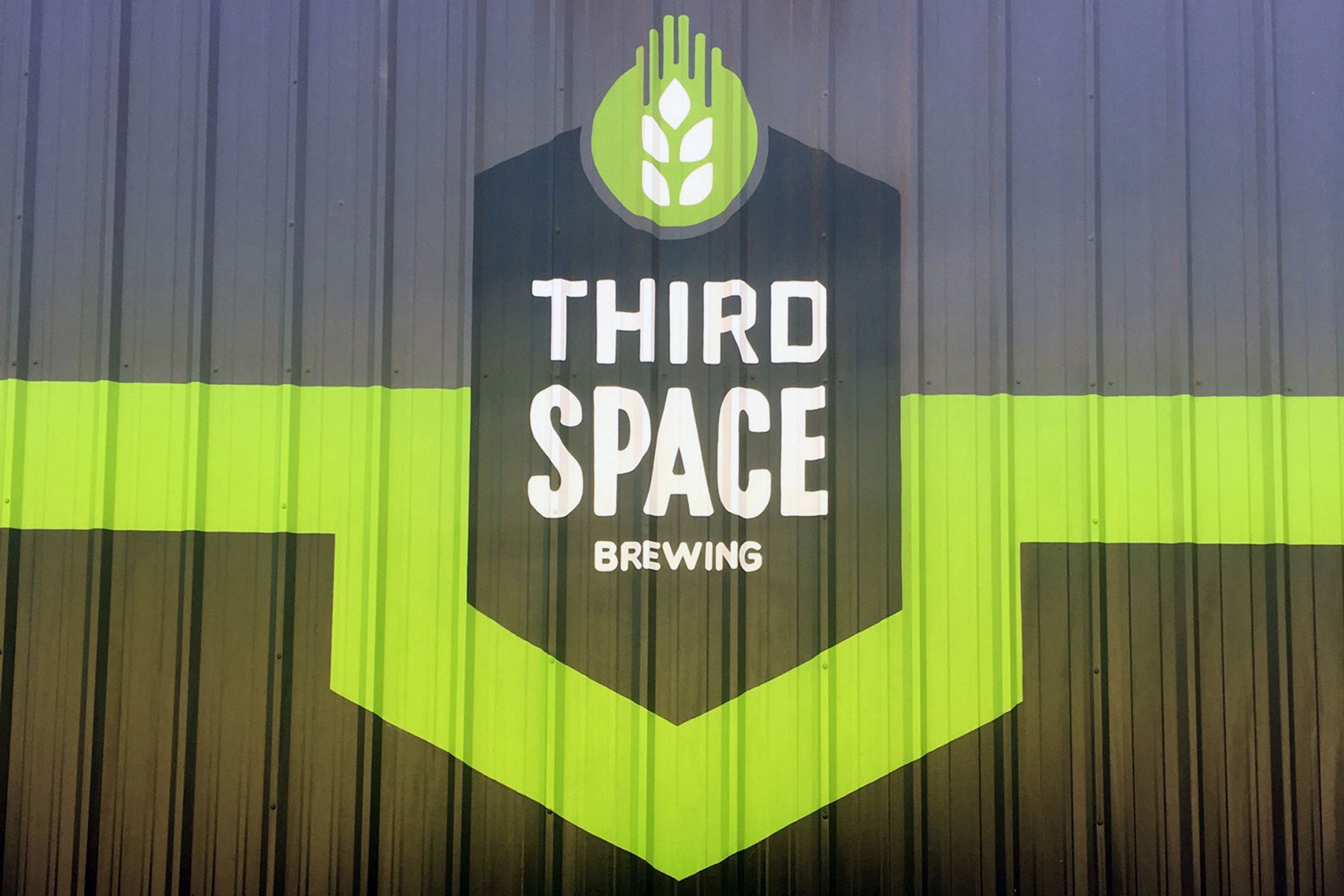 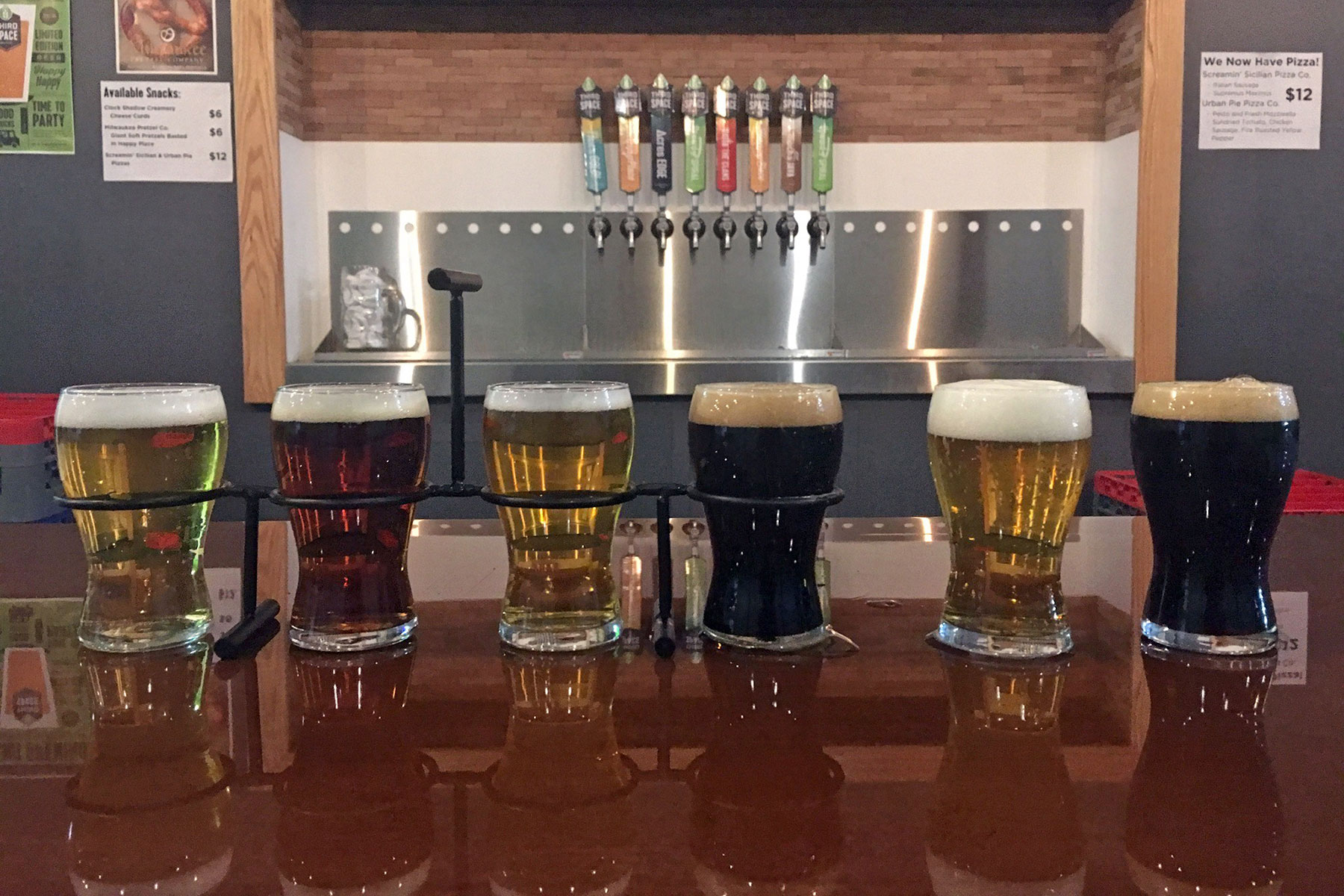 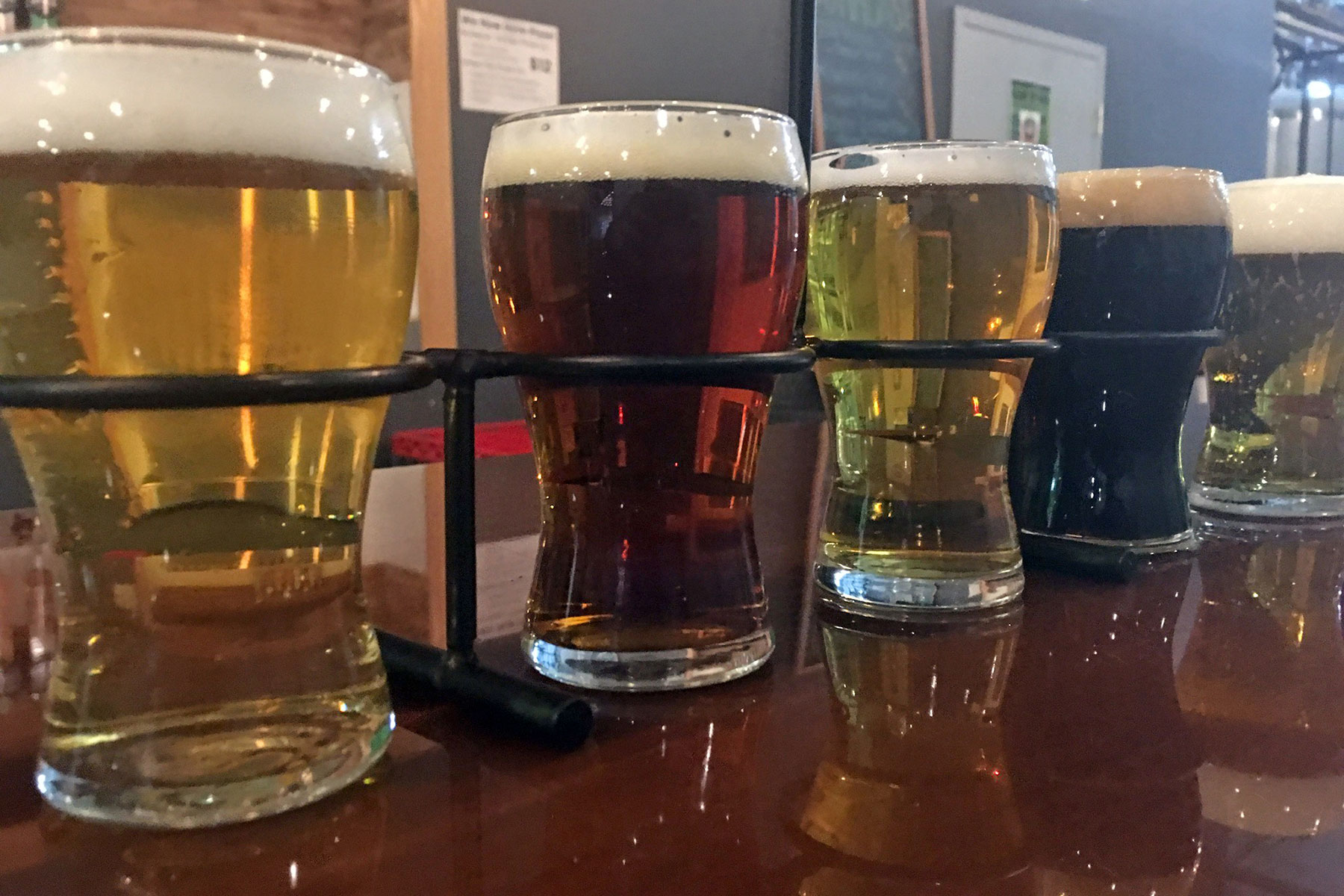 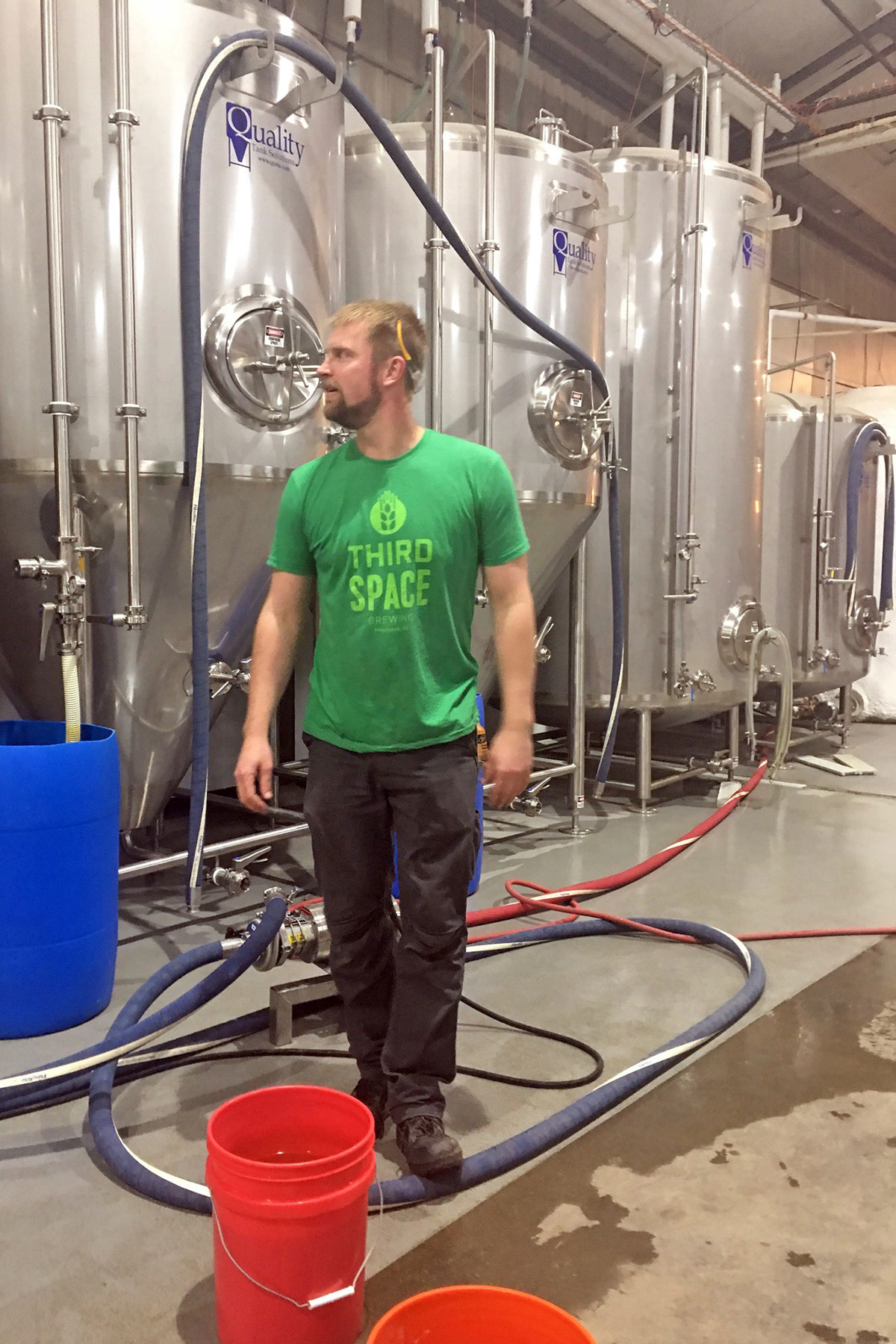 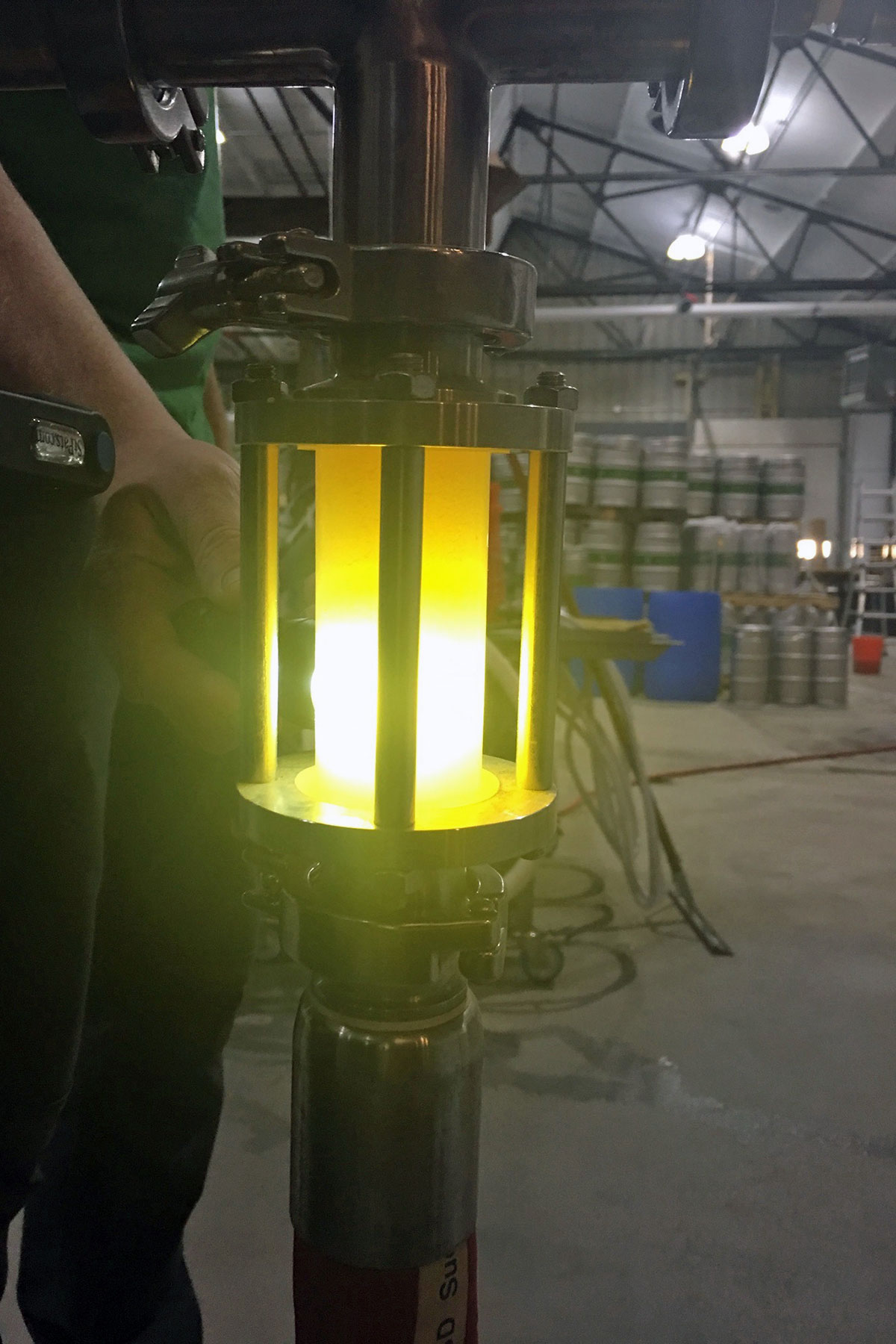 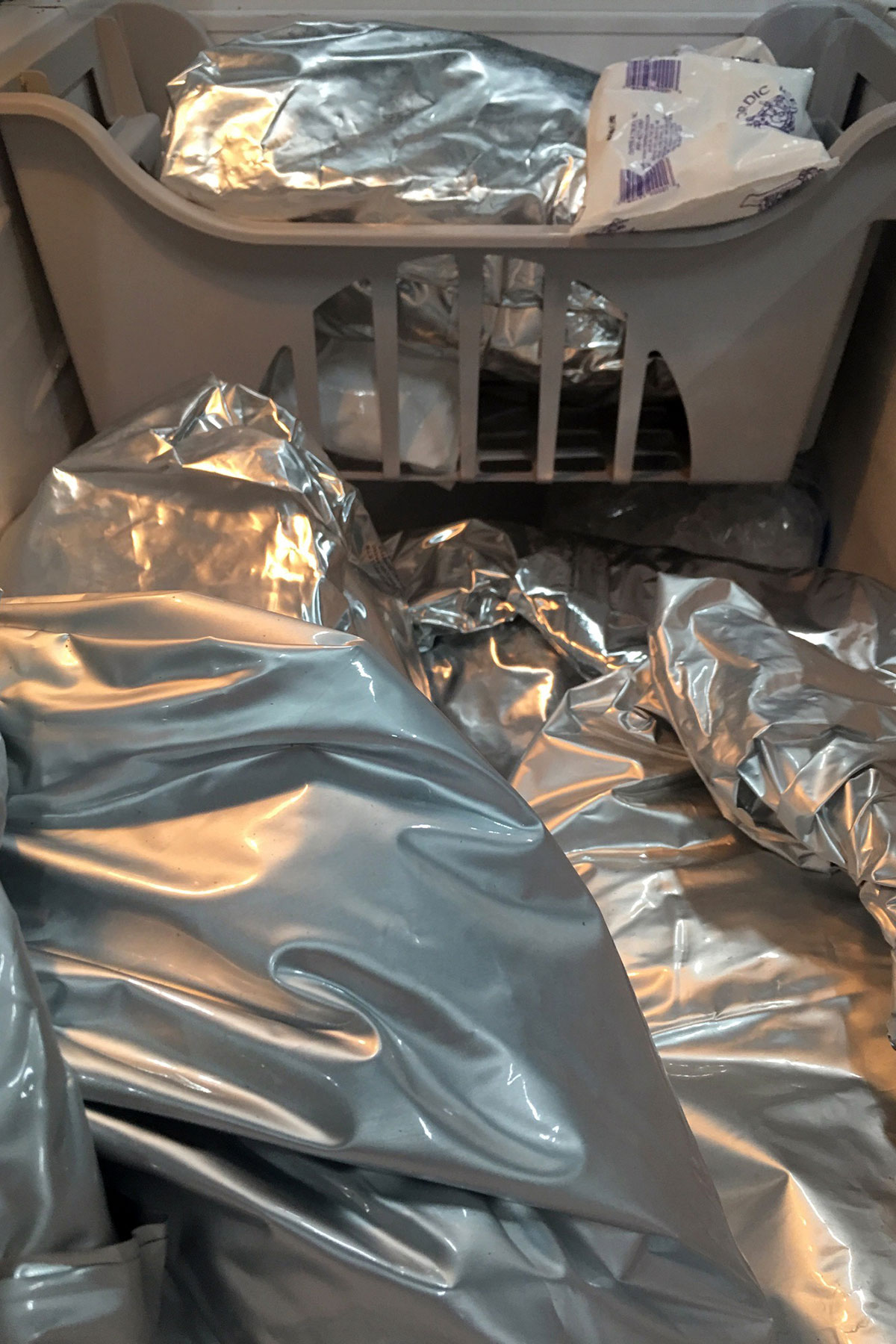 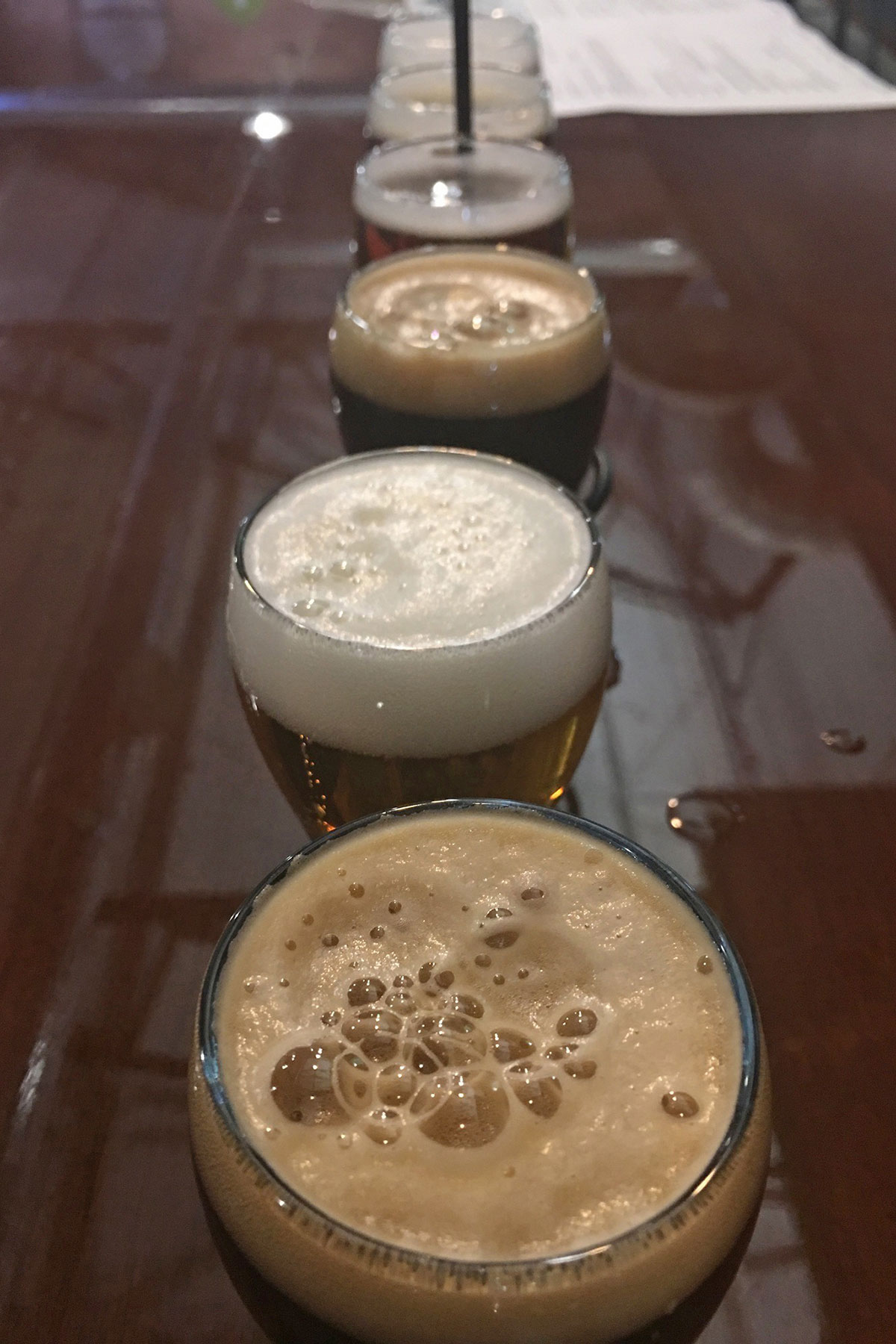 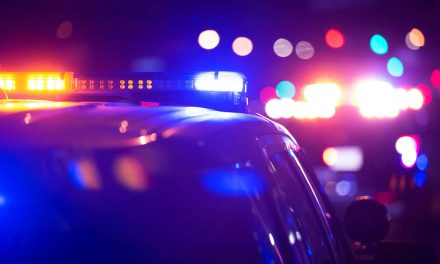 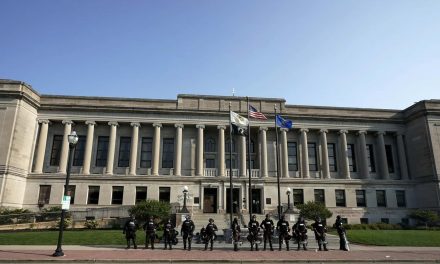 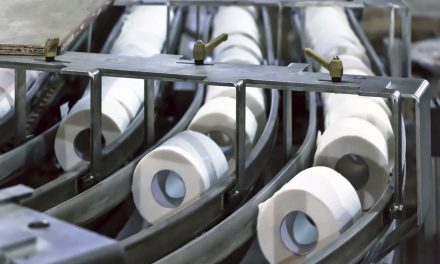 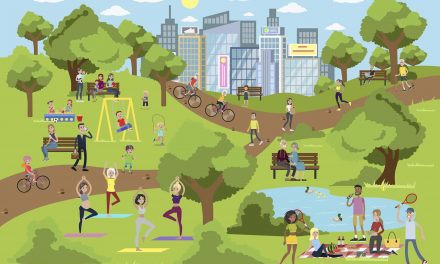