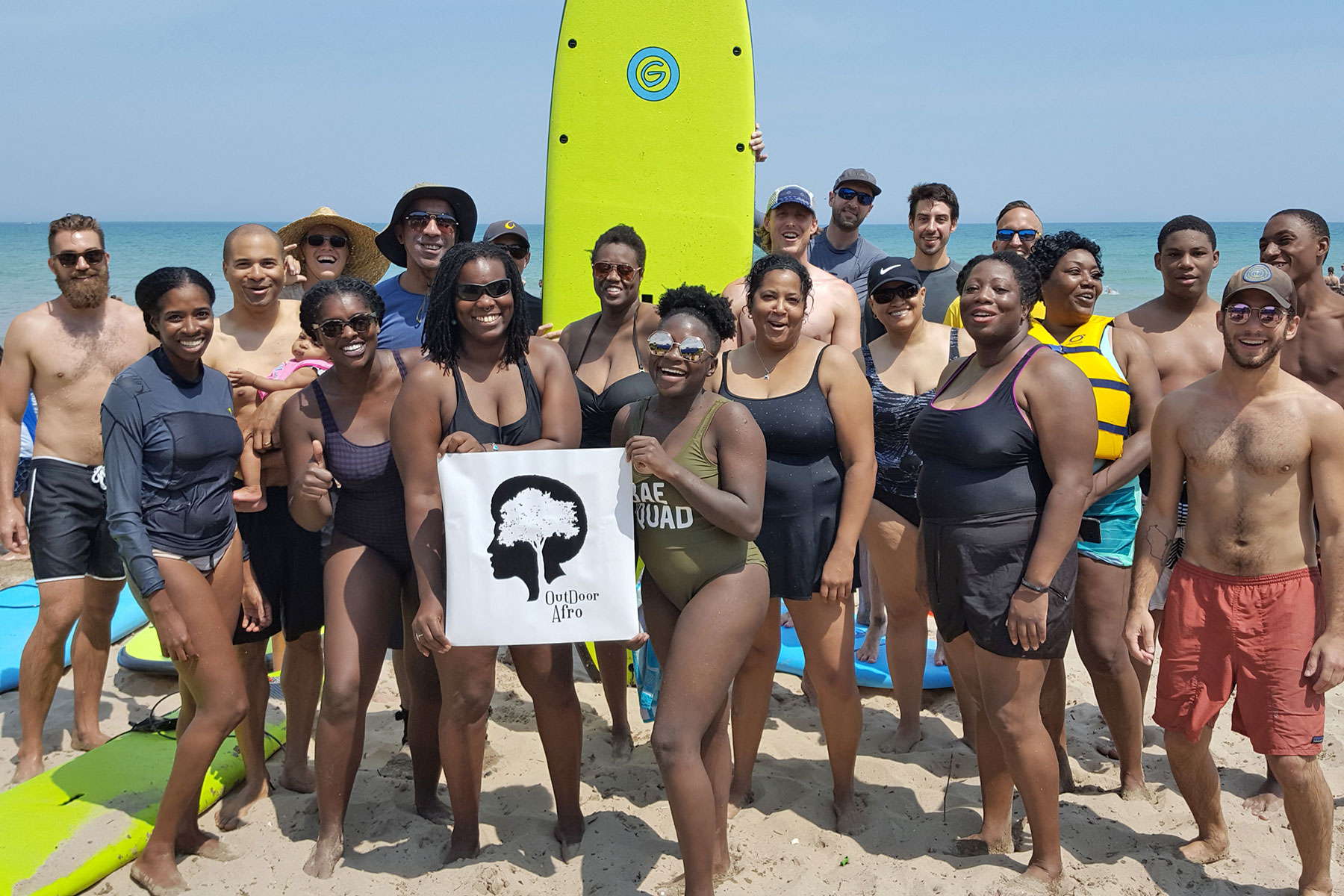 On the surface, it may look like the surf lessons and frolicking have become a staple of the annual Surf @Water events, but that perception simply reflects the fact that more people having fun on Lake Michigan.

When reviewing Surfrider Foundation-Milwaukee’s intention behind these lessons, and the experience had by those catching their first wave, people realize that this day means much more. For the organizers, Surf @Water illustrates the credo that “you protect what you love.” This approach to environmental activism and awareness stems from the recognition that in order to fight for something, in this case the Great Lakes, beach access, and water quality, individuals first have to love it.

The inspiration for Surf @Water was born out of conversations that the executive committee had with the Foundation’s founder, Glenn Hening. During the early days of the Milwaukee chapter, Hening stressed that while there is value in traditional information campaigns and beach cleanups, those efforts did little to grow the numbers of participants willing to protect our lakes and oceans. His approach was to not just give people information on the need to protect water resources, but also to actually get them in the water. To have them experience it in ways they never imagined. And for Surfrider, this has been getting people to surf.

Surf lessons at Surf @Water have introduced hundreds of kids, adults, and families to their first wave, each returning to shore to see themselves and their lake differently, and with a greater appreciation and stronger desire to protect it. Lake Michigan has also proven to be a hub for bringing the diverse communities of Southeastern Wisconsin together. Surf @Water has seized upon this as a way to facilitate dialogue and create opportunities for those unfamiliar with being on Lake Michigan to get their feet wet.

For the second consecutive year, Surfrider Milwaukee joined with Outdoor Afro, an organization committed to celebrating and inspiring African American connections and leadership in nature. The partnership has become a highlight for participants, and resulted in positive experiences and meaning that extend far beyond a day at the beach. Tena Madison, leader of the local Outdoor Afro network, summed up her experience by reflecting on what she felt when witnessing how the lives of others had changed, through catching their first wave.

”At the end of our lesson, there was not one face that did not contain a smile of either accomplishment or joy. In truth, with all these images of Black pain bombarding us on social media, any chance to witness Black joy is a balm for my soul,” said Madison.

The belief that “Blacks don’t surf” is not due to apathy by African Americans across the country. It reflects decades of cultural and legislative prohibitions that have kept people of color from participating in these activities. The resulting psychological boundaries that were imposed over generations were long embodied by literal and physical boundaries steeped in Jim Crow era laws. Laws inspired by concerns about the co-mingling of races and genders, as well as an extension of the segregation that was commonplace across America and starkly represented across Milwaukee County. While those laws have long passed, the divisive residue, limiting beliefs and restrictive behaviors remain. Yes, the signs may have come down, but there remain lines drawn in the sand that people are still reluctant to cross.

Such restrictions have in many ways been internalized for those across our community. “Blacks don’t [insert activity here]” is at times still heard by people of color when they share their experiences of recreation outdoors. The irony is that their very experience in doing the activity they love disproves that tired stereotype. But of greater concern is that this continually disproven assumption is often uttered by other African Americans.

This plays a not so subtle and often influencing role in the vast homogeneity with the sport of surfing. However, the growing surf community of Milwaukee is in a very unique and fortunate position to change that. With a surplus of waves, the reasonable affordability of the sport, and proximity to breaks that are unparalleled in cities that border the Great Lakes, there are thousands of others who not only have the chance to learn to surf, but in the process can become advocates for protecting the very lake, waterways, and source of our community’s drinking water, that we love.

The change that comes from catching a wave or merely sitting on a board as the sun rises are multifaceted and different for each person. But each experience is special, enriching, and life-changing. The benefits are not mutually exclusive either. A more diverse community of surfers opens doors for dialogue, relationship, and community that often does not exist on dry land. As Lake Michigan faces challenges in the months and years ahead that threaten the waves we surf, the fish we eat, and the water we drink, it will require an even greater alliance of people to stand together to fight for what we love.

Over the August 4th weekend, that alliance was strengthened on one afternoon when a group of people got together and shared laughs, great times, and more than a handful of waves. 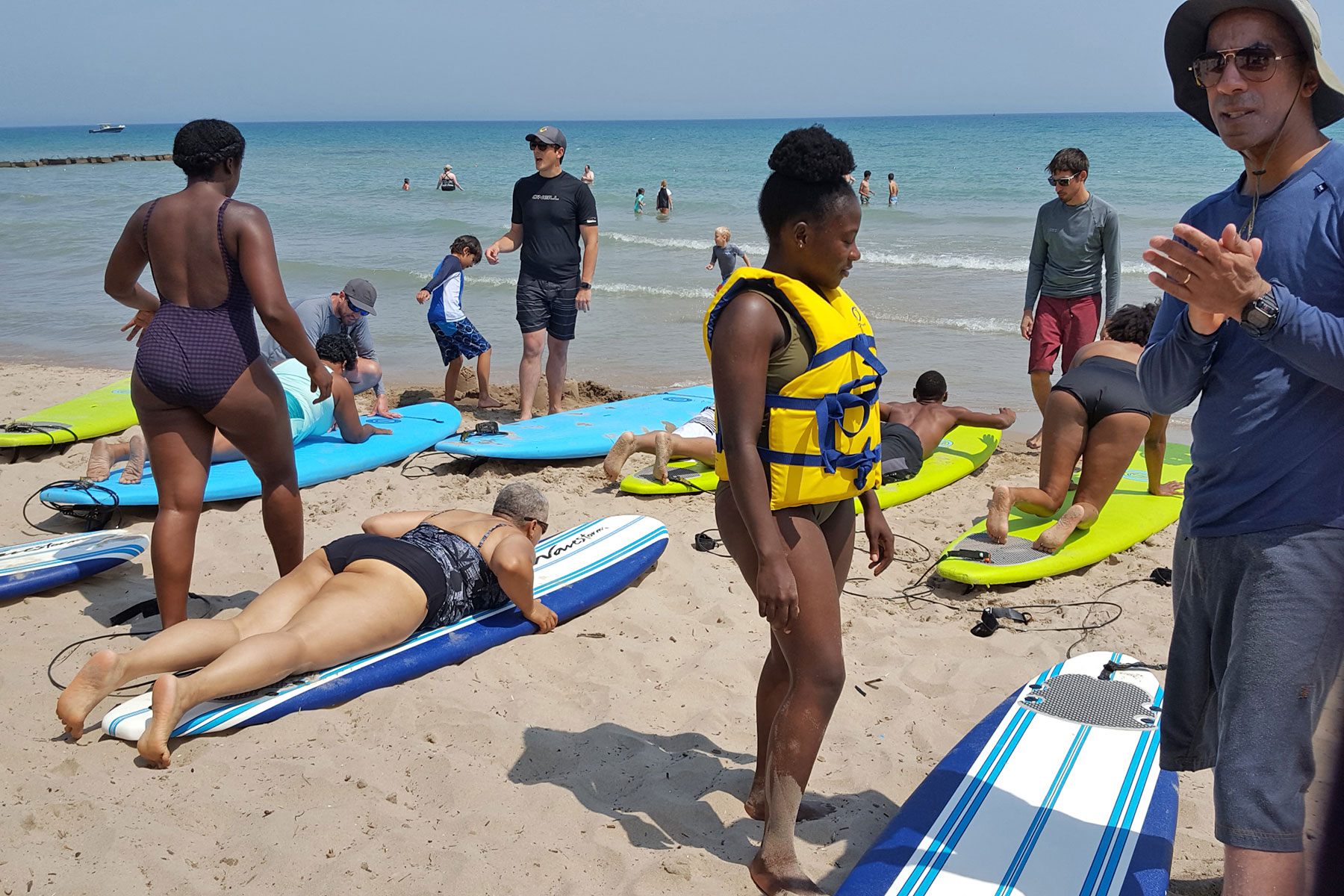 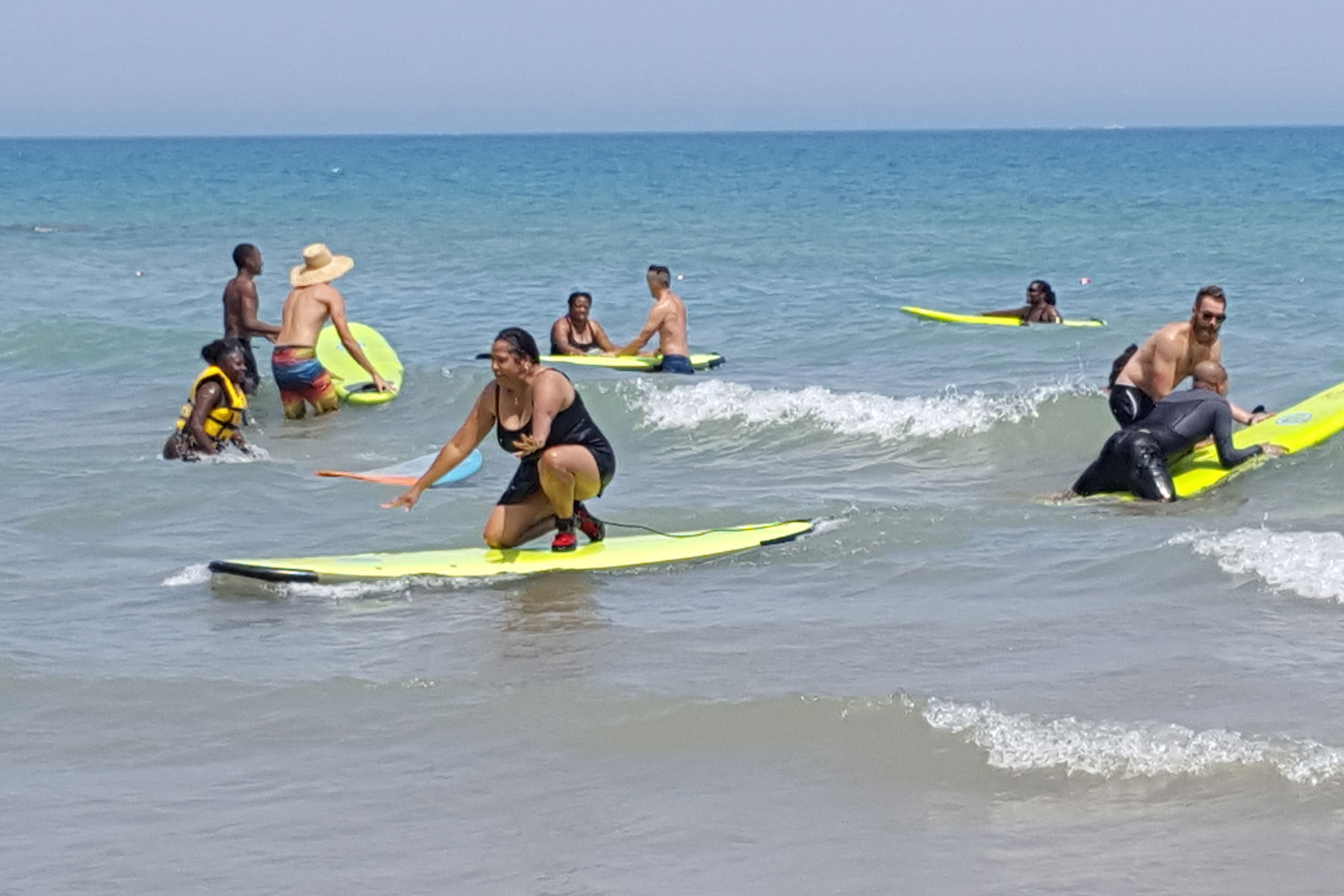 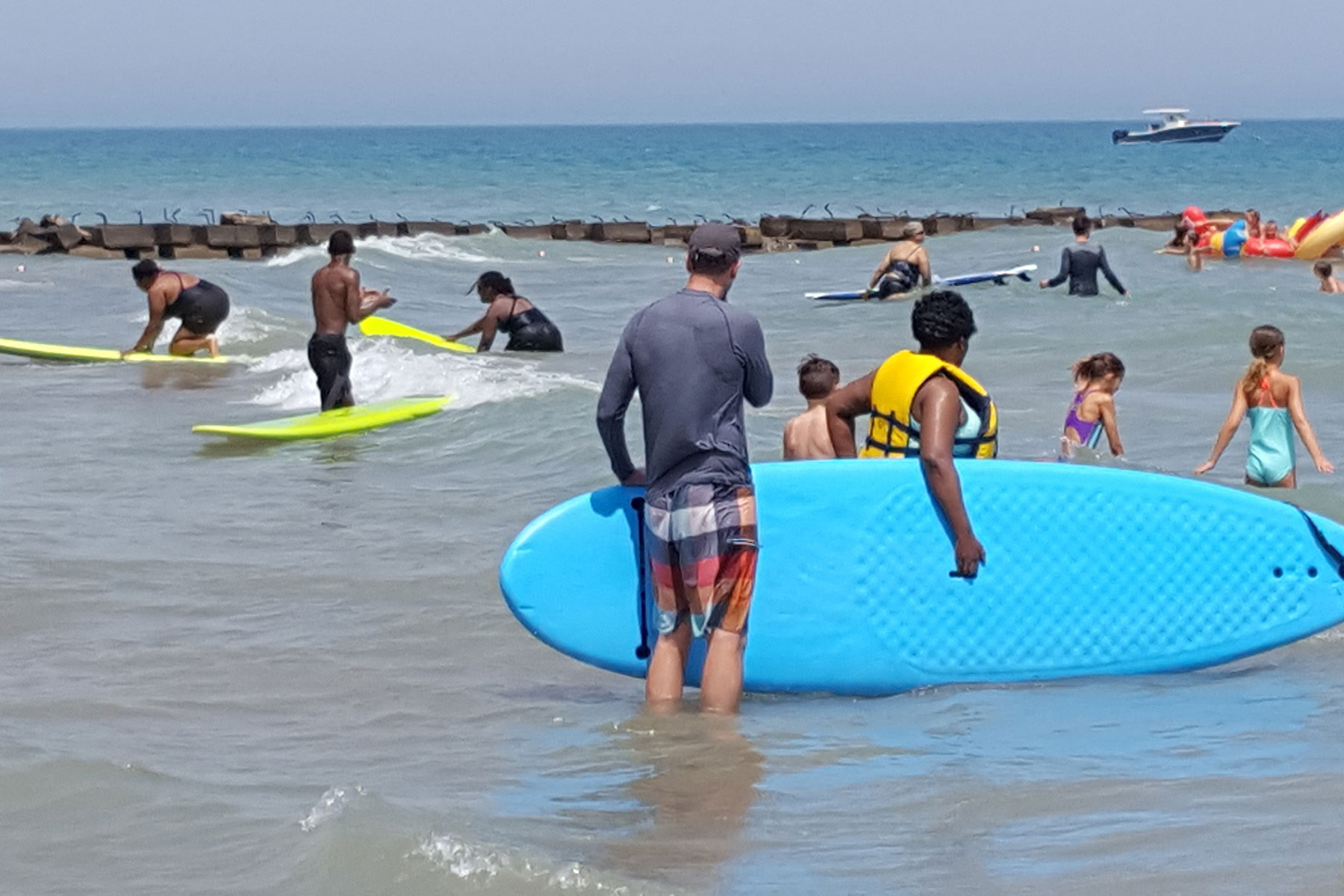 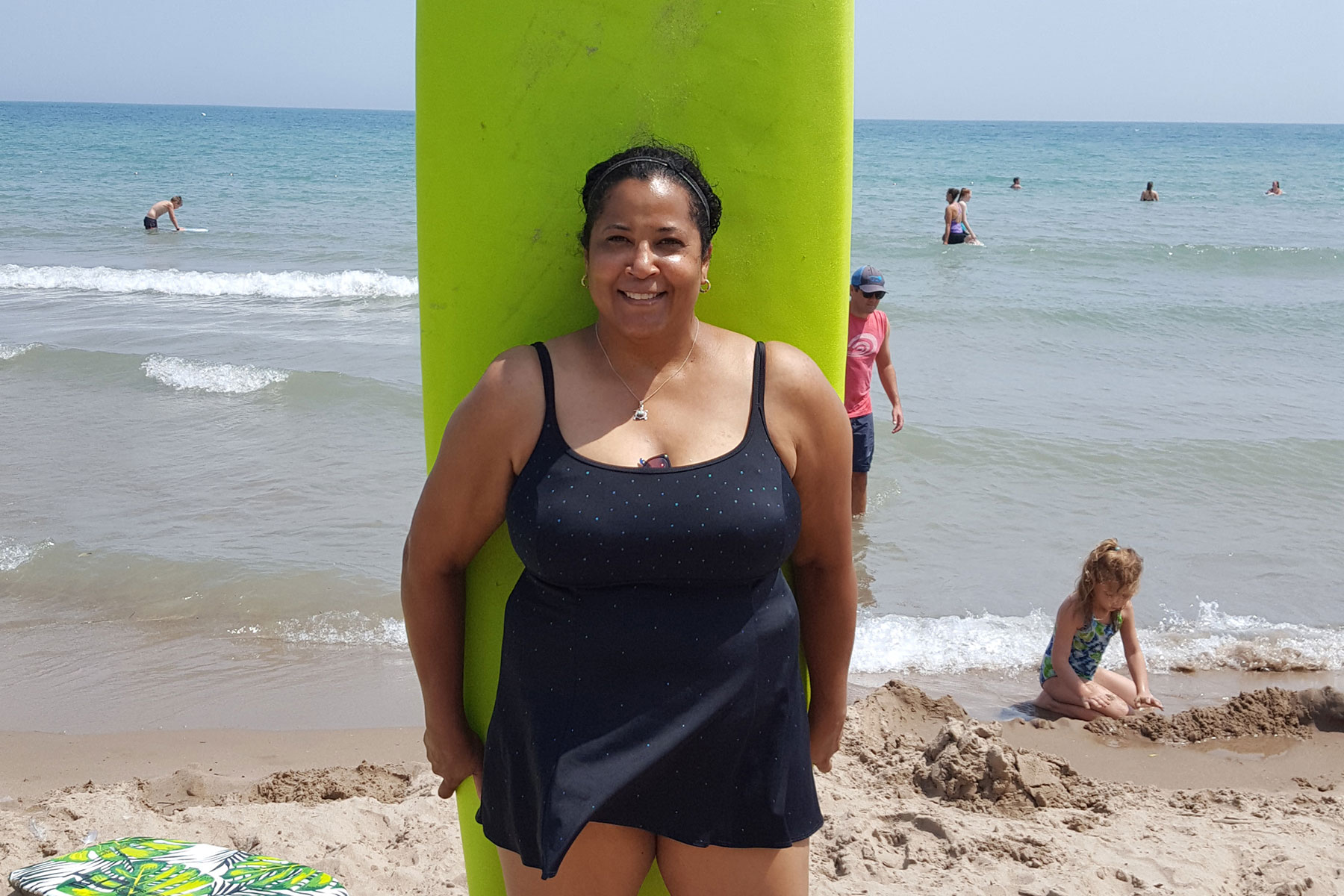 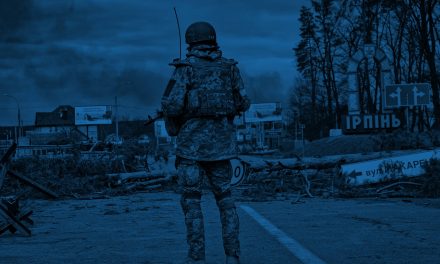 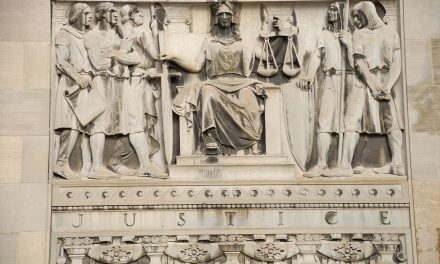 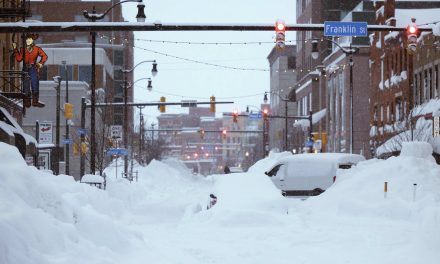 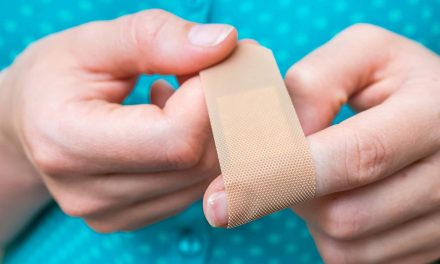