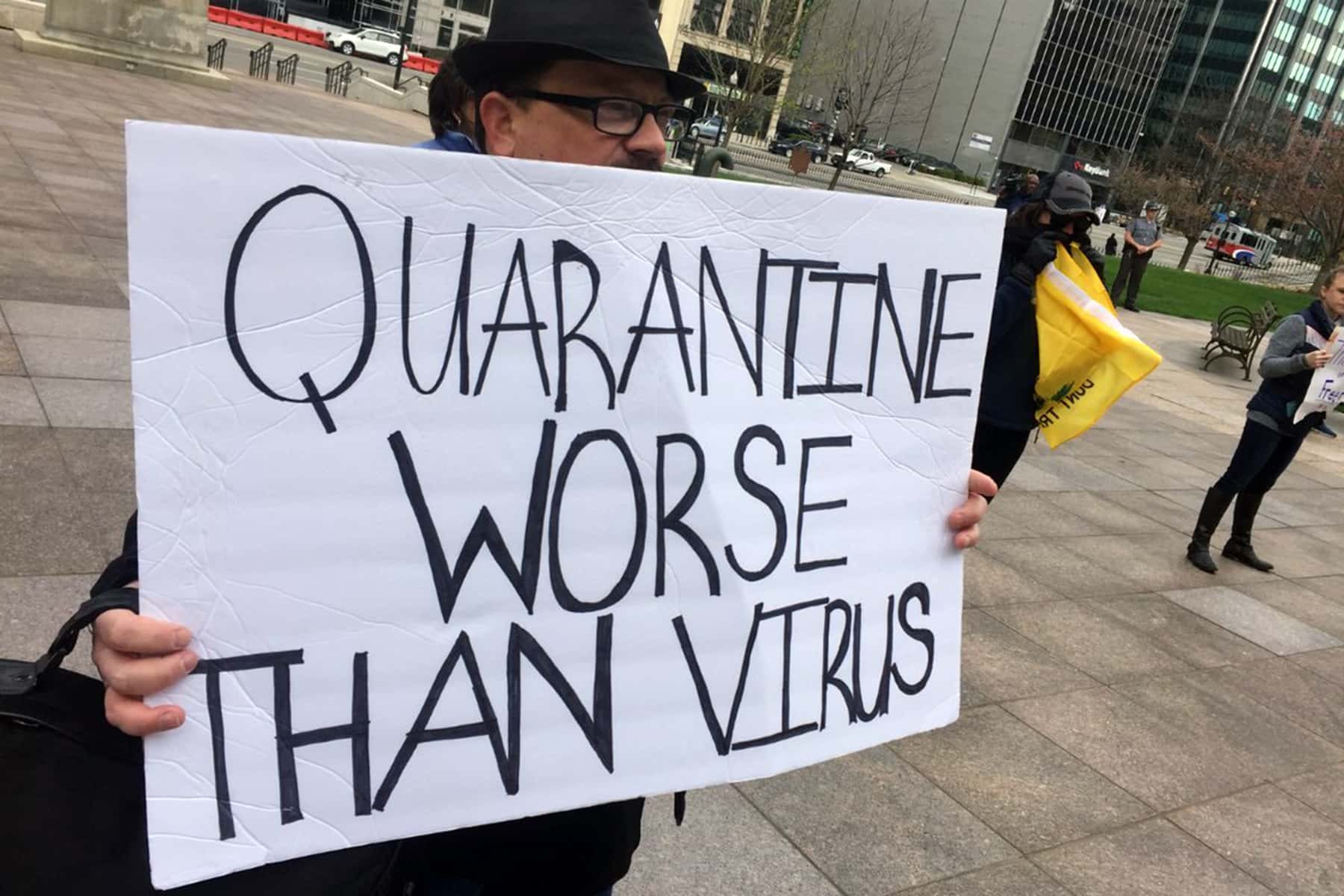 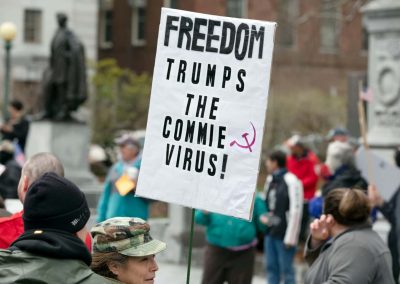 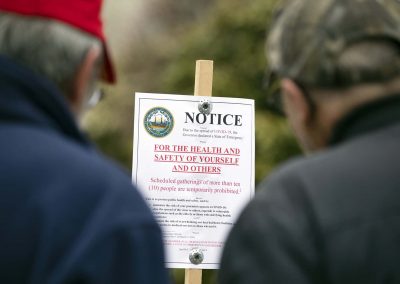 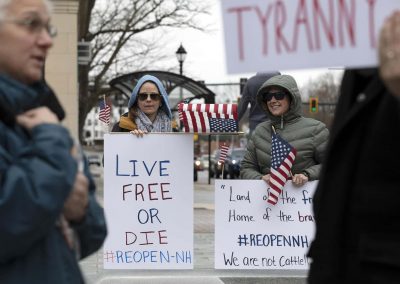 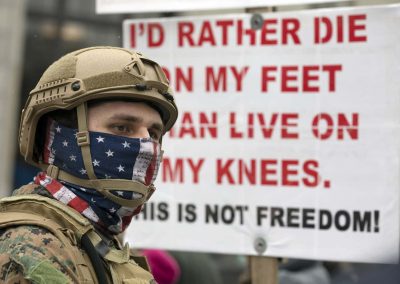 The big news for two days has been the “protests” of state governors’ stay-at-home orders and mandatory business closings to try to contain the novel coronavirus which, as of today, has taken more than 40,000 American lives.

The protests started last week in Lansing, Michigan, on Wednesday, April 15, when demonstrators descended on the state Capitol to protest the “statists” they said were destroying the economy and taking away their liberties. On Friday morning, April 17, Trump tweeted that people needed to “LIBERATE” Michigan, Minnesota, and Virginia, all states with Democratic governors.

Then, Saturday, April 18, the Fox News Channel advertised “emerging rallies/protests to reopen economy” and, lo and behold, there they were on television tonight: protests in Colorado, Illinois, Florida, Tennessee, Wisconsin, and Washington.

These protests are a classic example of trying to control politics by controlling the national narrative.

The protests are backed by the same conservative groups that are working for Trump’s reelection. The Michigan Conservative Council, one of the organizers of the Michigan protest, was founded by a pro-Trump couple active in state Republican politics. Another organizer was the Michigan Freedom Fund, whose leader, Greg McNeilly is a Republican political operative who worked for Secretary of Education Betsy DeVos’s family.

Protests in Wisconsin were organized by the Committee to Unleash Prosperity, founded by Republican pro-Trump economists Arthur Laffer and Stephen Moore, and by FreedomWorks, a training group for conservative activists that grew out of a political organization founded by David and Charles Koch. FreedomWorks is most famous for its organization of the Tea Party movement in 2009. Its president, Adam Brandon, told Vox reporter Jane Coaston that “this has the same DNA [as] the Tea Party movement.” It “just so happened a lot of our activists were organizers.”

The Fox News Channel personalities cheered on the events, with Jeanine Pirro saying of the Michigan protesters: “God bless them, it’s going to happen all over the country;” Laura Ingraham tweeting a video of it, saying: “Time to get your freedom back;” and Tucker Carlson interviewing a representative of the Michigan Conservative Council on his show before the person did another interview on “Fox & Friends” the next day. On Saturday, FNC ran graphics showing where protests were planned across the country from April 18 to May 2.

These are not spontaneous, grassroots protests. They are political operations designed to divert attention from the Trump administration’s poor response to the pandemic. Even more, though, they are designed to keep the American public divided so that we do not protest the extraordinary economic inequality the pandemic has highlighted.

These protests have diverted the national conversation by turning a national crisis into partisan division along the lines the Republican Party has developed since the 1980s. But in reality there are few actual protesters: two-thirds of Americans are worried that lockdowns will end too early, not too late. People began to separate physically even before governors required it, and say they will not stop distancing until they are certain they are safe, no matter the official government stance.

Still, the focus on partisan division is slowing down talk of the administration’s failure to provide the testing we need before it is safe to reopen businesses and stop the stay-at-home orders. Testing enables public health officials to identify and shut down hot spots; we need hundreds of thousands more tests a day.

Trump says the states have enough tests to reopen. “They don’t want to use all of the capacity that we’ve created. We have tremendous capacity,” Trump said during a White House briefing. “They know that. The governors know that. The Democrat governors know that. They’re the ones that are complaining.” But Maryland Governor Larry Hogan, the chair of the National Governors Association and a Republican, says this is “absolutely false.” Hogan told CNN today “It’s not accurate to say there’s plenty of testing out there and the governors should just get it done. That’s just not being straightforward.”

The change of subject protects not just Trump but also the ideology at the heart of his Republican Party. Since 1981, Republicans have argued that the economy depends on wealthy businessmen who know best how to arrange the economy — the makers – and that it is vital to protect their interests. Under their policies, wealth in America has moved upward. The pandemic has highlighted how these policies have removed economic security for ordinary people. They cannot pay their bills, and they might well turn against an ideology that uses our tax dollars to bail out corporations while they must risk their lives to pay their rent.

The $2.2 trillion coronavirus relief package highlighted the protection of big business at the expense of ordinary Americans. It expanded unemployment benefits with an additional $600 per week for up to four months and provided a one-time $1200 payment per person for those who make less than $70,000. It also provided for $350 billion in loans for small businesses to cover expenses. But those benefits are meager compared to the policies of other developed countries, which are covering 75-90% of the wages of workers affected by shutdowns.

Unemployment benefits are hard to get in general as systems are overwhelmed, but in Florida, where the $275 cap for unemployment is among the lowest in the country, former Republican Governor Rick Scott deliberately made the unemployment application process difficult to keep the unemployment numbers low. “The system was designed to fail,” an advisor to current Republican Florida Governor Ron DeSantis told reporters. Now, “it’s a [expletive] sandwich.”

The $350 billion in loans for small businesses, known as the Paycheck Protection Plan (PPP), is already gone. Its distribution raised eyebrows. Handed out on a first-come, first-served basis, the loans often went to big businesses rather than small ones. Ruth’s Chris Steak Houses, for example, which has more than 5000 employees and had $468 million in revenue last year, got $20 million (the limit was supposed to be $10 million, but it applied from two divisions). The allocation of the money was also uneven, leading to accusations of political favoritism, although there is still too little public information about the loans to verify what really happened.

The benefits for big businesses and the wealthy from the bill are clearer. Democrats had to battle to get oversight for the $500 billion allocated for big businesses, but when Trump signed the bill he issued a statement saying he would not honor the oversight provisions. He said the administration “would not treat spending decisions as dependent on prior consultation with or the approval of congressional committees.”

Then we learned that Senate Republicans had inserted into the bill a tax loophole that will deliver a $70.3 billion tax cut in 2020 to just 43,000 individuals, 82% of whom make more than $1 million a year. The argument for the cut was to free up financial liquidity during the pandemic, but Republicans have wanted the change since the 2017 tax cut passed. The tax break “is so generous that its total cost is more than total new funding for all hospitals in America and more than the total provided to all state and local governments,” Representative Lloyd Doggett (D-TX) said.

For people eager to retain our current government and its policies, ginning up a media frenzy over alleged partisan divisions is a welcome diversion. It helps distract us from the growing sense that our government “of the people, by the people, and for the people” has lost its way. 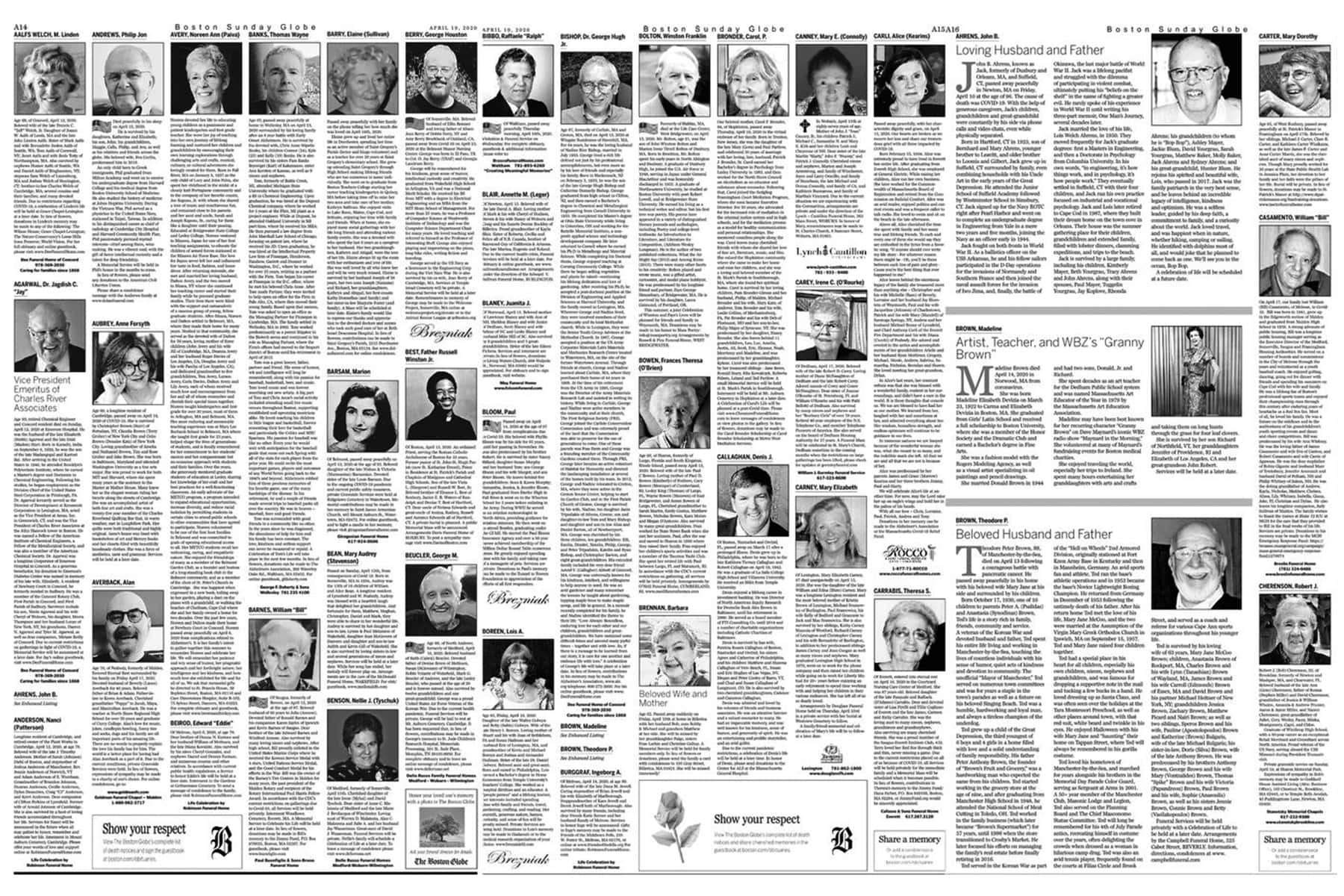 Three of the 16 pages of death notices published in the Boston Sunday Globe on April 19. 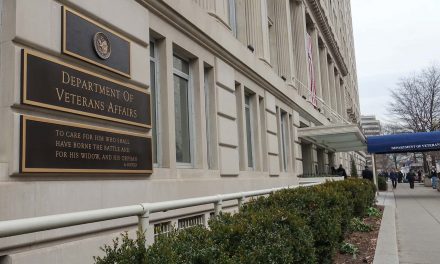 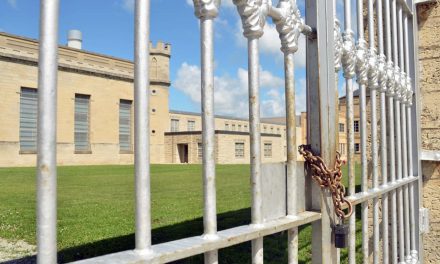 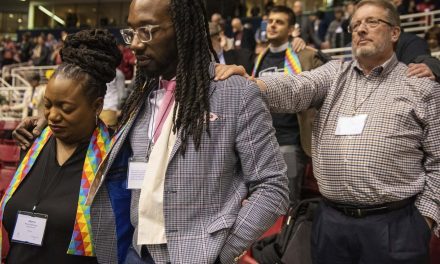 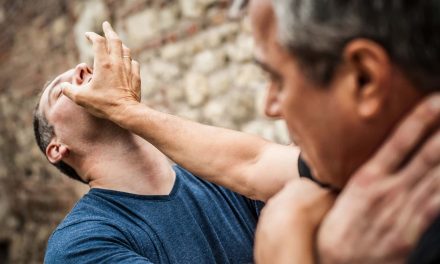