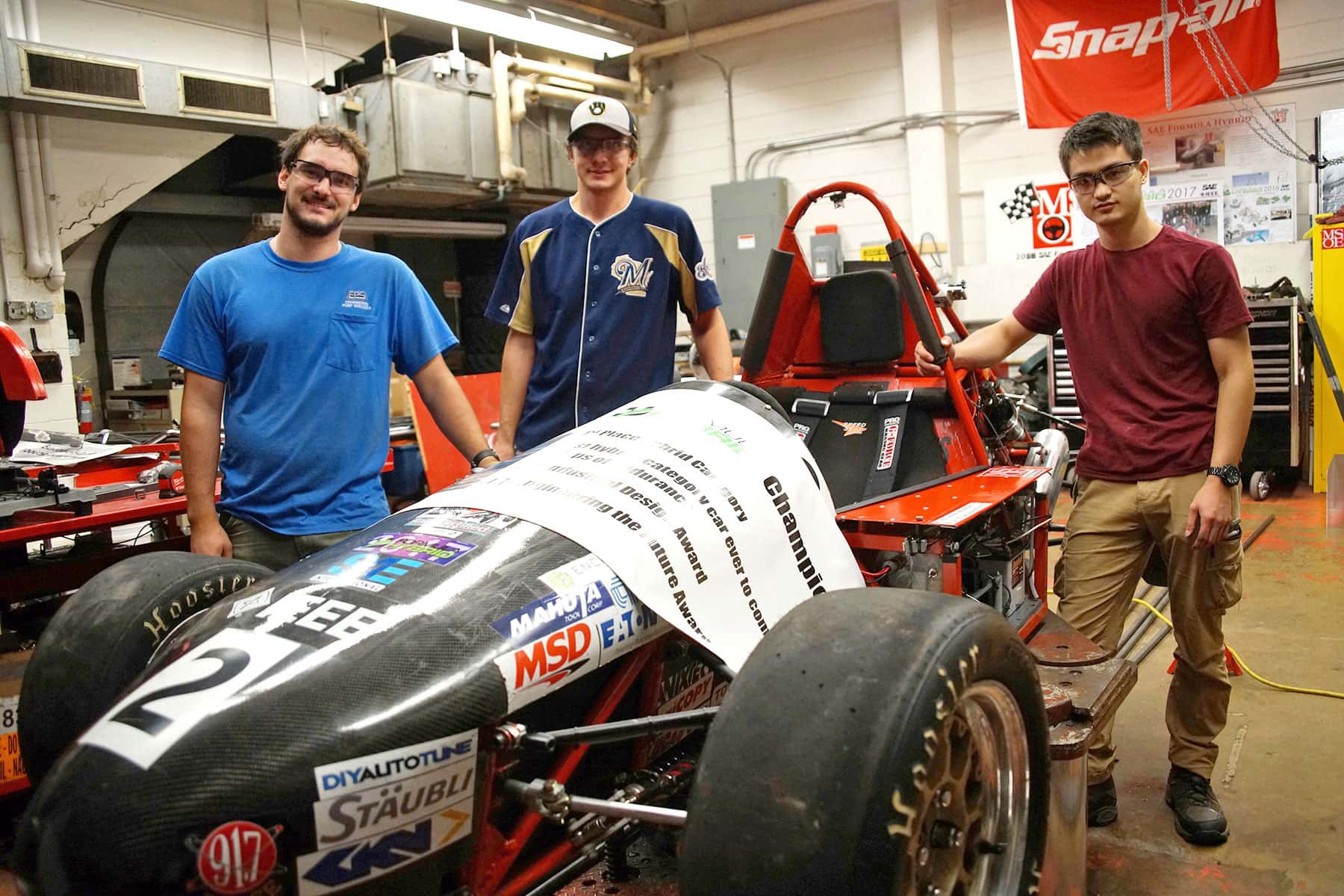 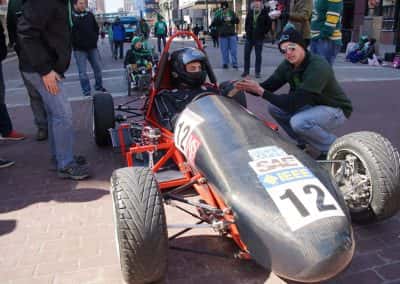 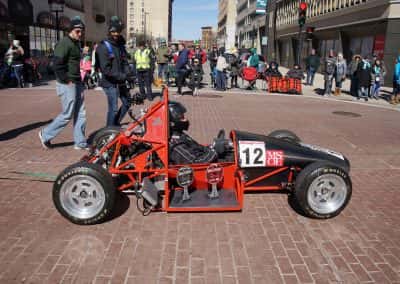 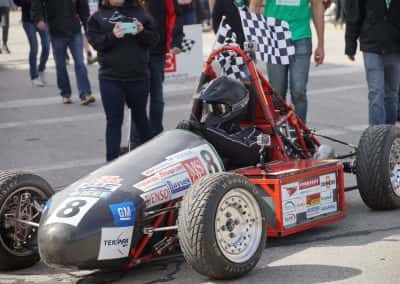 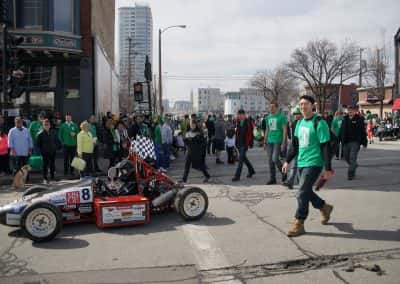 Each year the Society of Automotive Engineers (SAE International) hosts a variety of student design competitions for teams of engineering students from universities around the world.

Among these competitions is Formula Hybrid, which adds another level of complexity by requiring hybrid and electric powertrain.

In the driver’s seat of MSOE’s SAE formula hybrid vehicle, junior Nicholas Vang skillfully steered his way around a one-kilometer section of track at the New Hampshire International Motor Speedway. Vang was one of three students to drive the 44-lap endurance portion of the SAE International Formula Hybrid Competition that took place in May.

Practically lying with his face upward, all Vang could see were the tops of the car’s tires, the nose cone, and the track as the engine spun to over 10,000 RPMs.

“That’s when I thought, ‘We can do this; we can break the record,’” Vang said.

MSOE’s formula hybrid team, Mozee Motorsports, was one of 19 teams that answered the challenge to design and build a formula-style electric or plug-in hybrid racecar for the Formula Hybrid Competition.

Founded and run by the Thayer School of Engineering at Dartmouth since 2006, Formula Hybrid is part of the SAE Collegiate Design Series and is regarded as the most complex and dynamic of the series. At the four-day event, students from across the United States, Canada, and India competed in aspects of design, acceleration, handling and endurance.

“We made it through the technical and mechanical inspections and that’s key to the competition,” said senior David Roulo, project manager for the 2017 team. “If you can get through inspections, you have a good chance at placing among the top four teams.”

After inspections, Mozee Motorsports went on to achieve the fastest unlimited class time in the acceleration event and fastest completion of the autocross event.

The team hit a snag when the car’s left-side axle broke. A competing team from Rensselaer Polytechnic Institute was not going to race the endurance challenge, and lent a replacement axle to MSOE allowing the team to continue with the competition.

“We knew that fielding a hybrid vehicle that can take on all 44 laps was a huge challenge,” said Lucas Bednarski, who drove in the autocross event and laps 22-33 in the endurance challenge. During the competition’s 11-year history no student-built hybrid had ever completed the entire run.

From the sidelines, the ten other Mozee Motorsports members who had made the 20-hour road trip to the competition watched and waited for Vang.

“Each lap the car would go up a hill and then disappear from view,” said Roulo, “I would hold my breath until I saw it again. You always wondered if the car was going to make it back around.”

But it did, all 44 times. MSOE was named competition champions and also took home the Institute of Electrical and Electronic Engineers (IEEE) Engineering the Future Award, which celebrates form and function in an efficiently designed and well-built vehicle.

The MSOE formula hybrid team started in 2010 as a senior project with eight students. Over a few short years it has evolved into a team with more than 60 active members, slowly climbing the ranks of the Formula Hybrid Competition. A milestone achievement came for MSOE in 2012, when the the team made it through all of the required technical and safety inspections for the first time. It was a gauntlet of engineers and automotive industry professionals who checked every aspect of their work.

“The rule book is more than 100 pages long,” said Vang, who served as team RSO the past two years. The team’s rules and safety officer (RSO) was responsible for making sure that the car had been built to specifications.

“Two-thirds of the teams don’t pass their inspections,” said Dr. Mathew Schaefer, associate professor of mechanical engineering and the team’s advisor. “You can’t run in the dynamic events until you pass tech.”

Each year after 2012, the team’s goals became incrementally more ambitious. By 2015, the MSOE team earned fourth place honors at the competition, and second place the following year.

“Compared to when I joined the team my freshman year it’s running like a well-oiled machine,” Roulo said.

“What set this team apart was preparation,” Schaefer said.

Having a finished car was not enough, it has to be tested. Intermediate deadlines with opportunities to run the car kept the team on task and able to find design weaknesses. This year the team had the car road-ready for the Milwaukee St. Patrick’s Day parade in March, and an invite-only event at the Fiat Chrysler Automobiles Proving Grounds in Chelsea, Michigan in April. FCA has been providing mentors for the team the past two years.

“At the Proving Grounds, teams go through a mock technical inspection with actual competition inspectors to identify what rules the teams are violating,” said FCA Powertrain Analysis Engineer Barry Mason. “The mock inspection allows the teams a few weeks to resolve any violation issues. Many of the competition design judges are FCA employees. Most importantly for the teams, we set up three of the standard dynamic event type courses to test their cars on. It can be challenging for teams to find a safe place to test their vehicles without bothering bystanders and this opportunity provides that.”

The car’s performance at the track surprised students. “It was much more potent this year than it was the previous year,” Bednarski said.

The MSOE racecar managed to keep pace with the traditional formula cars. But testing wasn’t the only benefit of visiting the Proving Grounds in Chelsea.

“Students being able to work with engineers who develop and test cars for a living and see how they work just increases the level of professionalism for our team,” Schaefer said.

After the dust settles

After setting the endurance record at the New Hampshire International Motor Speedway, MSOE students pushed the car back to its paddock with their peers clapping as they walked by. “I felt a little like a celebrity,” Bednarski said. But he had mixed emotions. “I was relieved because I knew my job was done and excited to enjoy the impending victory. But I also felt kind of lost. I had achieved this incredible goal with this team, and I didn’t know what to do next.”

Roulo, who graduated in past the spring, said he hoped that the team continues to build from the work of previous years. “I am excited for the freshmen coming in,” he said. “We have created a recipe for continued success.”

Being able to participate in the competition was an valuable educational, Schaefer said. “You are working with a diverse team of students from different disciplines with diverse responsibilities, beyond mechanical engineering,” he said. “Project management, business functions like getting sponsorships and financial support, along with the technical design details, made this is a fantastic experience.”

The competition was also a big recruiting and networking event. MSOE formula hybrid graduates have gone on to work at FCA, Polaris and Ford. Members of previous teams currently work for Harley-Davidson, Pratt and Miller Engineering, LG Chem, and Tesla.

“I think the most exciting part about everything was doing it all with some of my best friends,” Bednarski said. “I got to jump into a truck with some great company every morning, drive to a race track and ultimately win an international competition.” 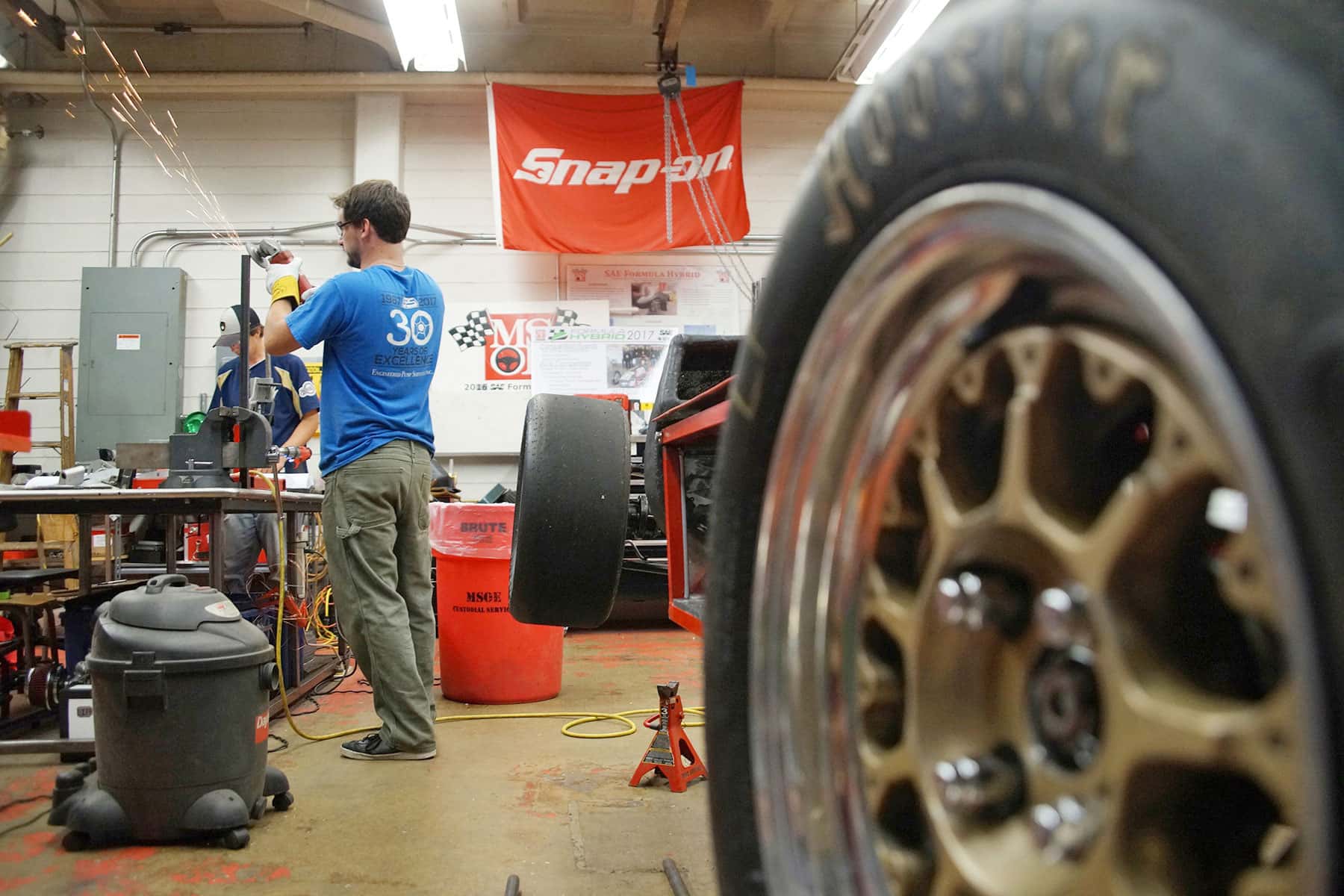 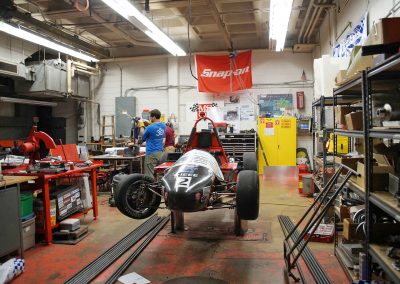 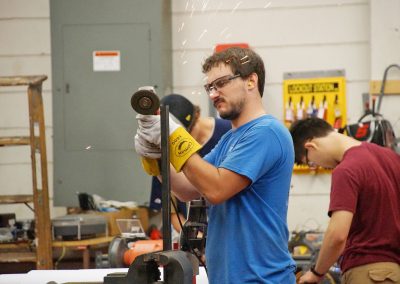 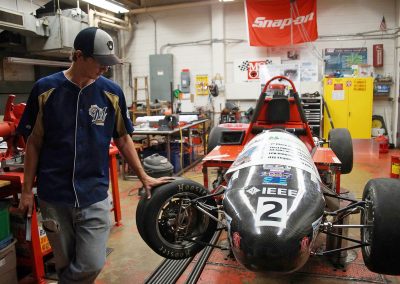 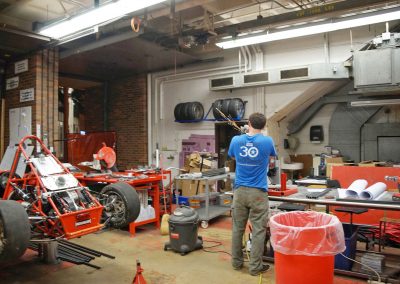 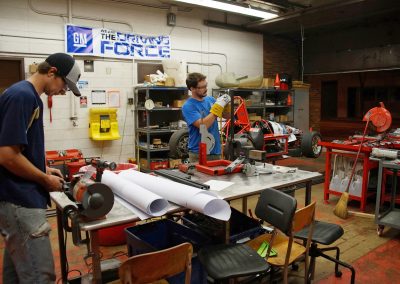 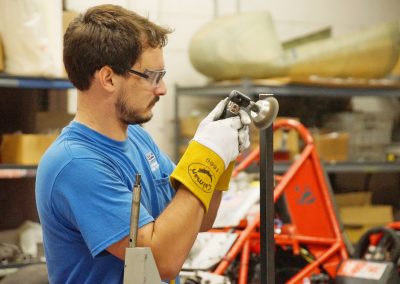 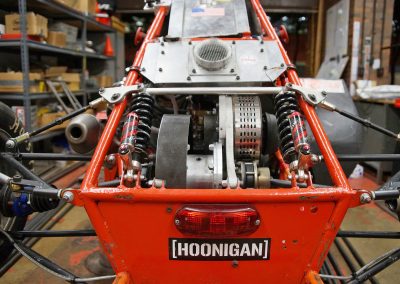 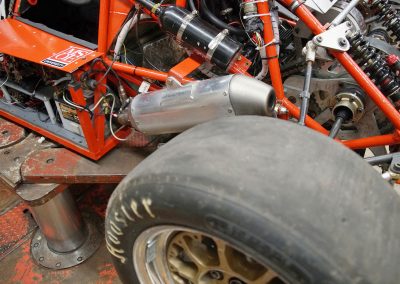 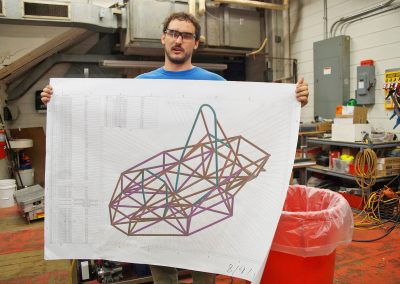 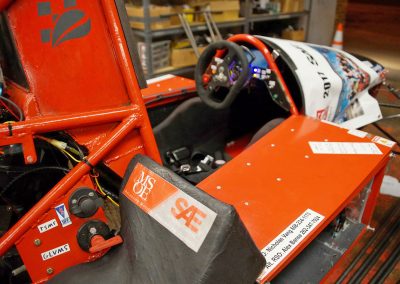 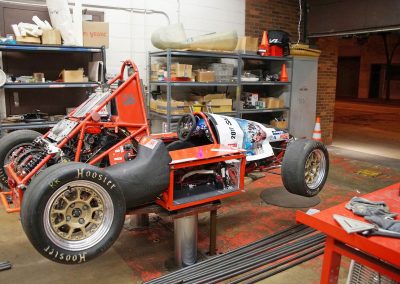 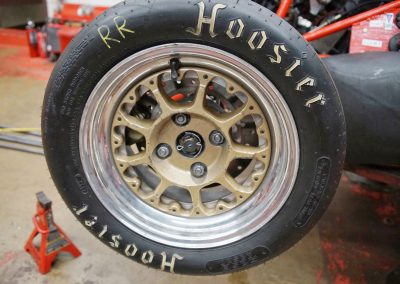 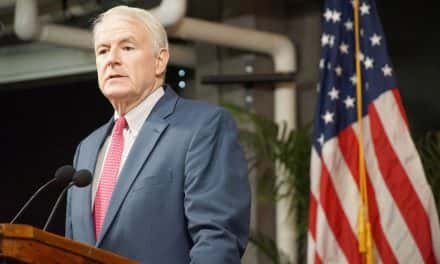 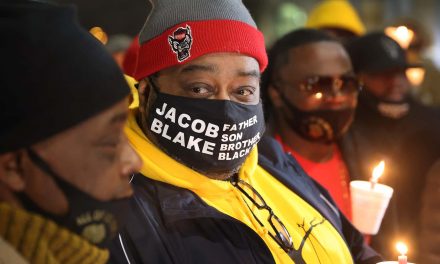 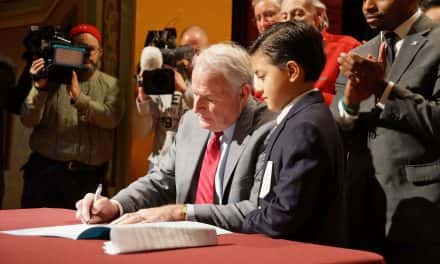 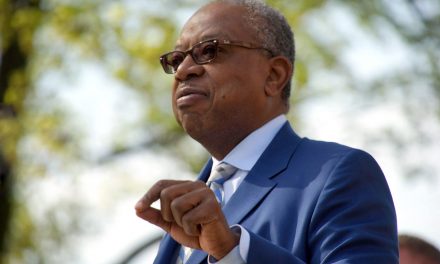