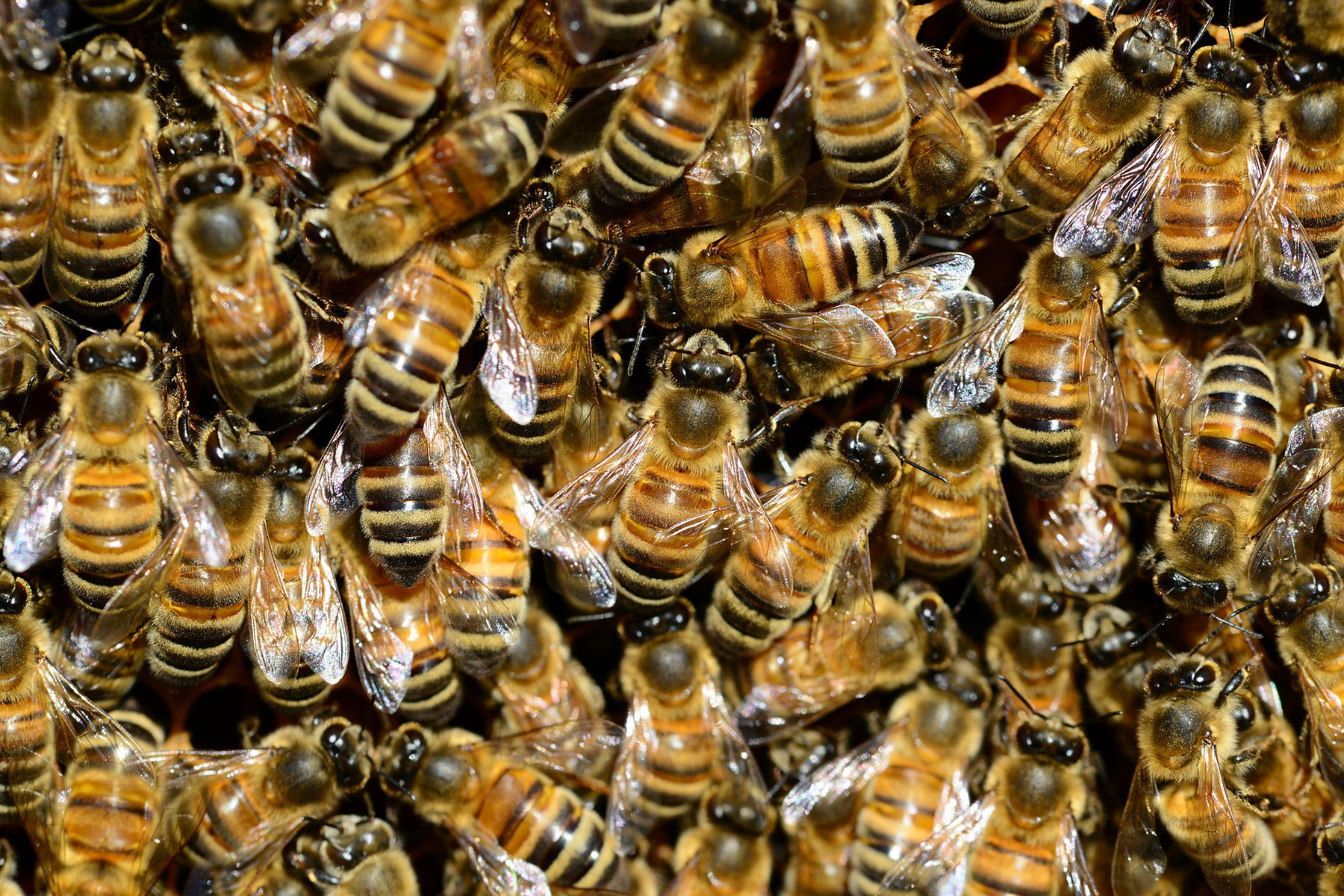 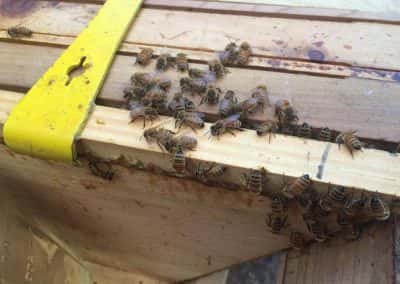 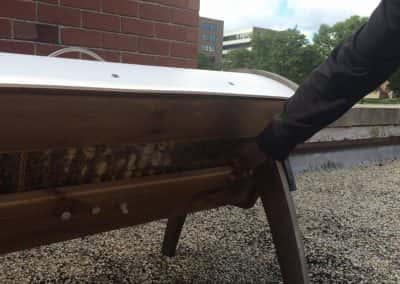 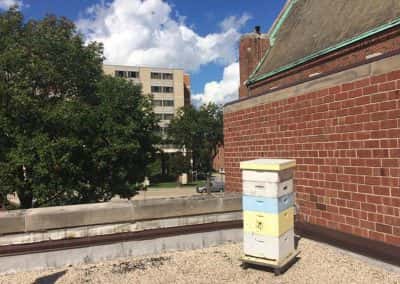 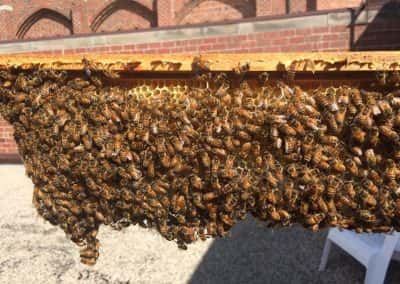 Bee the Change, a non-profit organization based in Redeemer Lutheran Church, trains meal program participants to be beekeepers and increases awareness of the importance of having beehives in urban areas.

Over 90,000 bees are busy at work making honey, carrying pollen, and building honeycombs on the rooftop of Redeemer Lutheran Church, located on 19th Street and Wisconsin Avenue, at the edge of Marquette University’s campus. The church stands between two worlds, one of poverty and the other of prosperity.

The nonprofit Bee the Change bridges these economic opposites through the care of bees. The effort is run by volunteer Margaret Stang, expert beekeeper Charlie Koenena, and a team of people who participate in Marquette’s Noon Run meal program. Since the organization’s start in April of 2016, each member has become certified in beekeeping and, as a team, leads educational presentations about the importance of bees and beekeeping around the city.

Even though Bee the Change team member Ken Johnson has only been working with bees since April, he already has a wealth of knowledge about them and is fascinated by their complexity and ingenuity.

“There’s just so much about them I love,” said Johnson. “I can’t put my finger on the one thing that really has excited me over another. The idea of royal jelly, that within a few days can make the difference between the queen of the hive or a worker bee, is incredible.”

In one of the standard educational presentations given by Bee the Change, Johnson explained how the bees make Royal Jelly, a substance only given to bee larvae who will become queen of the hive. He then demonstrated how to approach the beehive, and how tell if they are in a “good mood,” which happens when the air temperature is cooler. He explained how the bees survive over winter through insulation from the honey, and how they make propolis to build honeycombs.

Johnson gave a tour of Bee the Change rooftop operation, pointing out how they keep the bees hydrated and where they “spin” the honey, which is how they process honey for consumption. At the end of the presentation he did a taste test, demonstrating the different flavors between Redeemer’s honey and the Sisters of Saint Francis of Assisi’s, nectar, produced from their 20 hives.

Such demonstrations are made possible by the Koenen’s “top bar” hive invention. This type of hive is safer and better for educational presentations than the traditional “Langstroth” hive. Koenen also runs an organization called the beevalengists, a group of people passionate about spreading the word on the importance of urban beekeeping throughout the city. His advocacy is partly inspired by bee communities.

“The most rewarding part of working with bees is just watching the unselfish giving that comes from the activities of the hive, and being able to witness this kind of altruistic behavior. It has parallels into our lives and our spirituality,” said Koenen.

Koenen partnered with Bee the Change, who uses his top bar hive design, and works with the organization on their two major missions: to combat the stigmatization of meal program participants, and to increase awareness about the importance of urban beekeeping.

Reverend Dr. Lisa Bates-Froiland, pastor of Redeemer Church, thinks that bees provide an avenue to discussing community issues and the negative perception of people who depend on food pantries.

“We are attacking two stigmas at the same time: the fear of bees and the fear of some of the people who are the fabric of our society, that are often ignored or looked over, or even cast aside.”

Bee the Change was started when Bates-Froiland and Dr. Katherine Wilson decided to put two beehives on the unused and empty rooftop patio of the church. Wilson is the executive director of the Frank Zeidler Center of Public Discussion, which is also housed in Redeemer Church. The Center is a legacy of Frank Zeidler, former socialist mayor of Milwaukee, and a main partner of Bee the Change. “Zeidler,” oddly enough, means “beekeeper” in German.

After Wilson and Bates-Froiland, with the help of Koenen, established two hives of bees on the roof, there was too much for work for them to handle alone. So they turned to the participants of their Noon Run program, who were more than willing to help.

Margaret Stang, a volunteer at Noon Run, was essential in recruiting participants to join Bee the Change. Once she became involved in the program, Stang caught the bee fever herself.

Like the bees, Bee the Change has built a strong community both among the their surrounding Milwaukee community and among themselves. Each team member is essential in the presentations they give, to educate the public about bees. The team has visited nursing homes, schools and community centers, and has also groups of the Redeemer congregation after Sunday mass.

To Stang, the team aspect of Bee the Change has been the most rewarding. Each member of the team has contributed towards their mission, and all feel like an important part of the general movement to spread awareness of the bees.

“Assuming that people will show up is a big deal,” said Stang. “This program will allow them to transition for employment or whatever transition they’re trying to make in their life.”

During these presentations, the team is most excited when they are able to take someone who was afraid of bees and get them to the point where they are able to hold one of the bars of the top bar hives, which normally has around 600 bees, and leave wanting to spread the word about bees.

The community nature of the bees and the people of Milwaukee have many parallels, which Bates-Froiland discusses in her sermons. Earlier this summer, Redeemer had a bee themed mass where Koenen brought bee costumes for the congregation to wear and Bates-Froiland gave a sermon focused to the importance of bees in the local ecosystem.

“Redeemer keeps bees at the church because bees need our help. And we need the bees. Desperately. Wisconsin honey bee colony survival rates were only around 40% last year. And 70 out of the top 100 crops that are cultivated for our food supply depend on pollination by the bees, everything from strawberries to chocolate,” Bates-Froiland said during the sermon.

The bees cared for by Bee the Change, as well as others in the urban setting, have seen dramatic increases in vitality. For example, 80% of Koenen’s bees from last year survived, compared to the national average of 40%.

“Contrary to most of our perceptions of the backyard gardening we have, hanging baskets, and foliage on the streets, all contribute to the fact that the bees we put in the city end up having more honey than the ones in the countryside,” said Koenen. “This is because in the countryside there is what’s called a ‘honey run,’ where there’s an abundance of a certain crop. Bees are like us, they need a diverse diet, and in the city they get that. There is definitely a strengthened vitality among urban hives.”

Koenen is working hard to improve laws and ordinances surrounding having beehives in residential areas. Koenen and Bee the Change are starting a movement to increase awareness of the importance of bees by putting hives in more public locations. Stang has also has worked at a women’s prison and would like to have bees installed there.

Bates-Froiland discussed expanding the Bee the Change program to other sites of Marquette’s Noon Run, as well as expanding to others in the network of churches and city non-profits. Bee the Change wants to see more places in Milwaukee house beehives, like nursing homes, schools, and businesses.

Later this fall, in conjunction with the Zeidler center, Bee the Change will host a public discussion about bees, ecology, and the stigma surrounding meal programs. 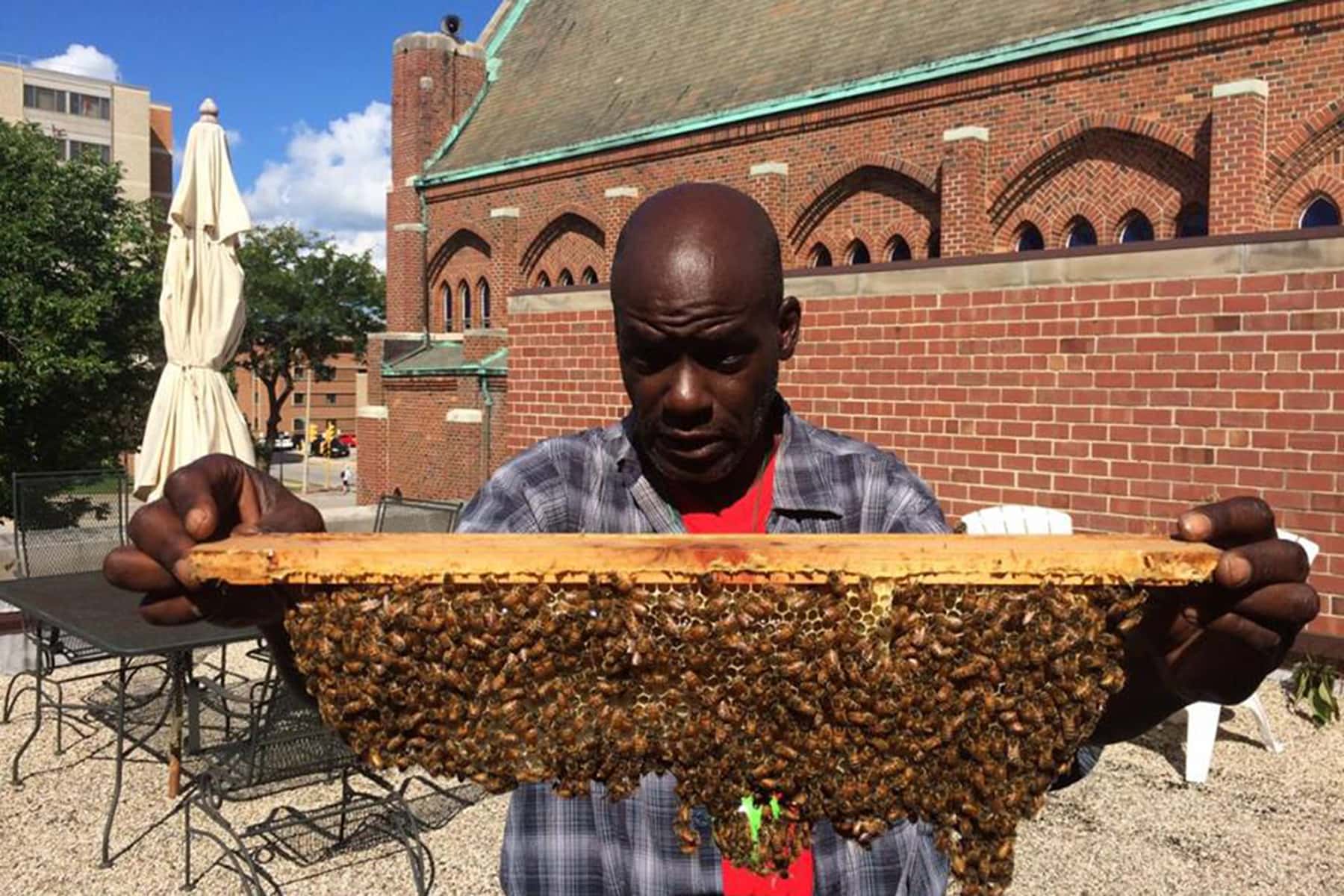 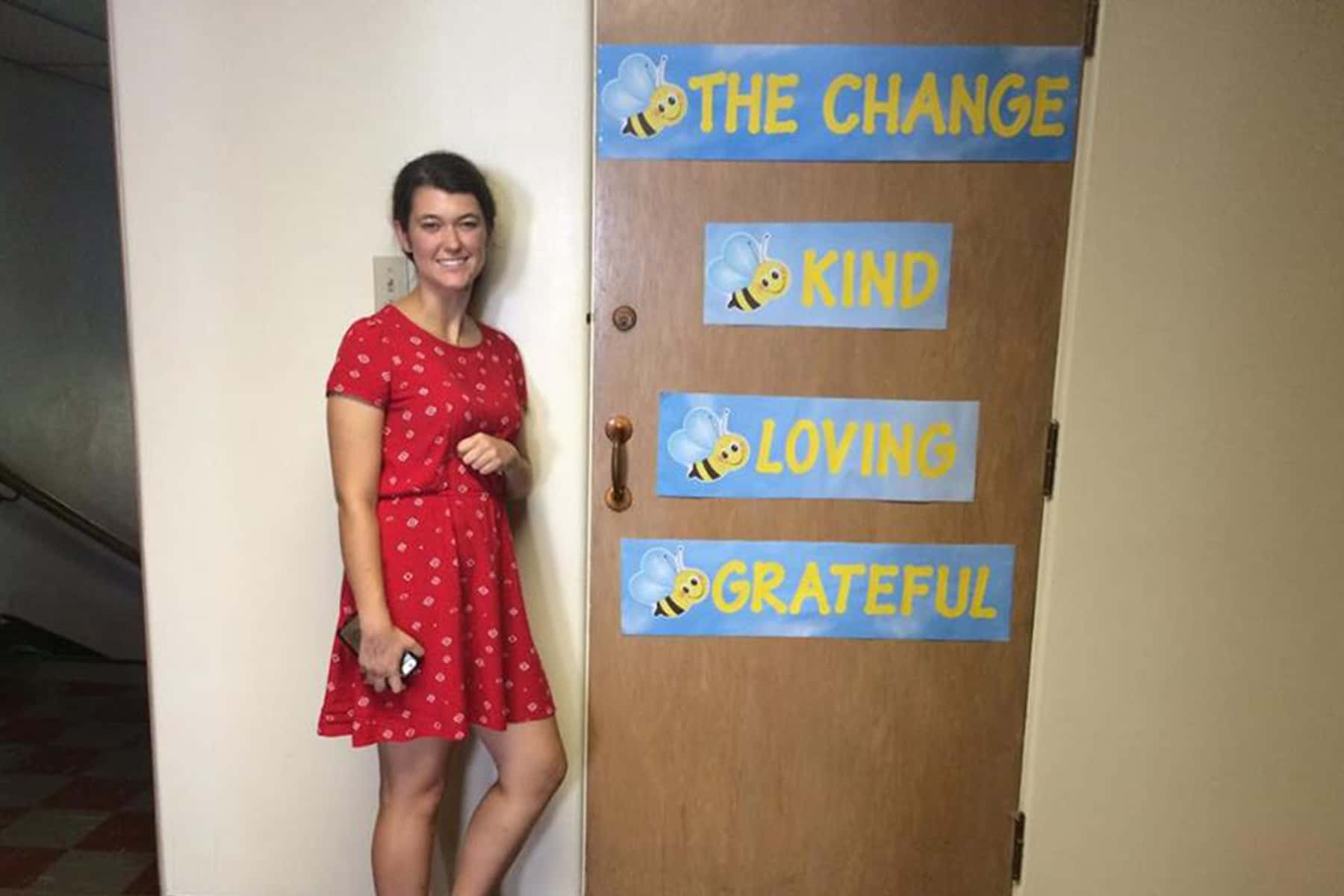 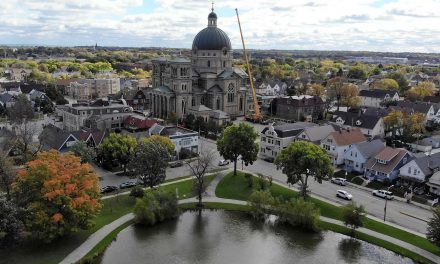 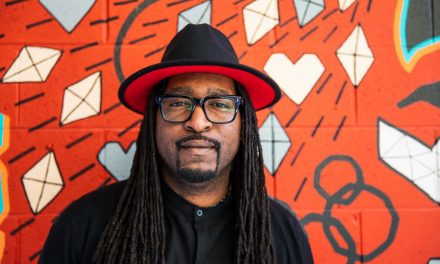 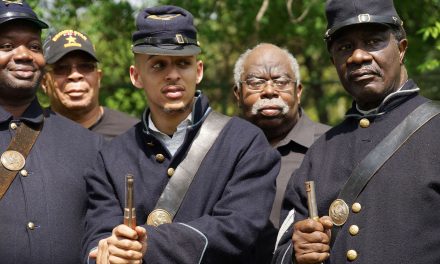 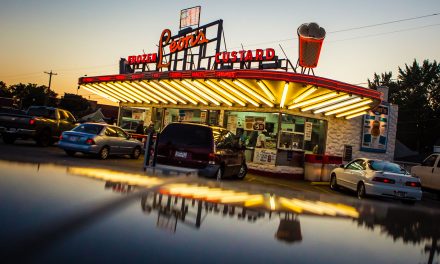 The Washington Post features Milwaukee as a must-see travel destination