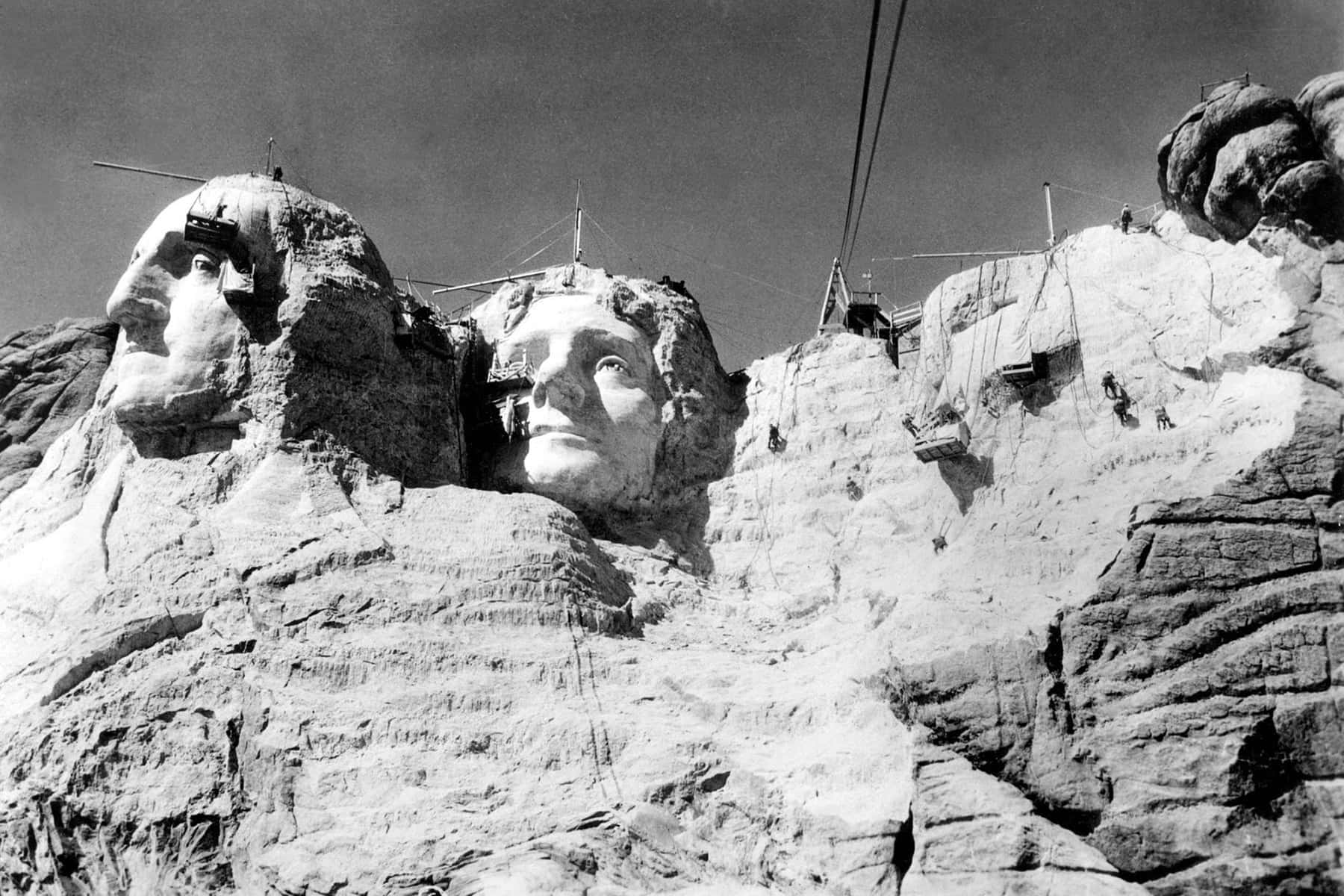 On a day that presidents traditionally use to avoid politics and reinforce Americans’ shared values – July 4, Trump gave a speech dividing Americans into two groups: his supporters and “the radical left, the Marxists, the anarchists, the agitators, the looters, and people who in many instances have absolutely no clue what they are doing.”

Trying to get people to look away from the devastating toll of coronavirus on this country— our official death toll is approaching 130,000 — Trump is staking out a position as the leader of a culture war.

The July 4th speech was an echo of the one he gave yesterday at Mt. Rushmore, where the faces of American presidents George Washington, Thomas Jefferson, Theodore Roosevelt, and Abraham Lincoln are carved into rocks sacred to the Lakota people. There, Trump set himself up as a defender of American history and culture against a “new far-left fascism” trying to destroy America. “Our nation is witnessing a merciless campaign to wipe out our history, defame our heroes, erase our values and indoctrinate our children,” Trump said. “Angry mobs are trying to tear down statues of our founders, deface our most sacred memorials and unleash a wave of violent crime in our cities.”

Giving such a speech at Mt. Rushmore enabled Trump to illustrate his promise to dominate the enemies he insists threaten his version of America. He superimposed himself, with the commanding power of the U.S. government behind him, over the sacred lands of the Lakota, who have tried since the 1860s to protect those lands, and who now suffer the nation’s highest levels of poverty, as well as the devastating social ills that go with that poverty, including terrible susceptibility to coronavirus as well as horrific numbers of missing and murdered women. Trump’s performance at Mt. Rushmore was a carefully crafted image of the most powerful man in America dominating the most marginalized people.

Mt. Rushmore was conceived in 1923 in a desperate attempt to draw tourist dollars to a state that had been rushed into the Union to protect Republican political dominance and could not manage to achieve economic stability. The story is this:

In 1889, Republicans knew they were in political trouble. Americans had turned against their conviction that the government must protect big business at all costs, and that any kind of regulation or protection for workers amounted to socialism. In 1884, for the first time since the Civil War, voters had elected a Democrat to the White House. Grover Cleveland promised to use the government to protect ordinary Americans, and to stop congressmen from catering to wealthy industrialists.

To regain control of the government, in 1888, Republicans pulled out all the stops. They developed a new system of campaign financing, hitting up rich businessmen for contributions, and got employers to warn workers that if they didn’t vote for the Republican candidate they would be fired. Nonetheless, Republican Benjamin Harrison lost the election by about 100,000 votes.

But he won in the Electoral College.

Republicans immediately set out to make sure no Democrat could ever win the White House again. They rushed South Dakota into the Union in 1889, along with North Dakota, Montana, and Washington—all Republican regions– to pack the Senate and the Electoral College. The next year, they rushed in Wyoming and Idaho, too, boasting that they would dominate government for the foreseeable future.

South Dakota, though, was a problem. Virtually all of the land in that new state belonged to the Lakota people.

The Lakotas were not originally from the region. They had been pushed west in the late 1600s from the area around the Great Lakes by warring tribes unsettled by the epidemics brought first by Europeans. But the Lakota believed the new land was their true spiritual home, and they considered the Black Hills there sacred. Once settled in the Great Plains, Lakotas adopted horses and became both wealthy and formidable warriors, so formidable they held their own against American incursions until after the Civil War.

In 1868, eager to stop Lakota attacks on the miners traipsing through their territory, the U.S. government agreed to leave the forts officers had built in Lakota territory. The Treaty of Fort Laramie established most of what would later become South Dakota as a reservation, along with the Black Hills. But the treaty did not stop miners, buffalo hunters, railroad men, or settlers from intruding on Lakota lands. In 1874, when a gold strike in the Black Hills sent miners pouring into the area, the government gave up trying to keep settlers out of the reservation, and instead set out to buy the Black Hills.

Oglala Lakota leader Red Cloud refused. The Black Hills were priceless, he said, and to get them officials would have to make an equivalent offer. Hunkpapa Lakota Sitting Bull was less diplomatic. “We want no white men here. The Black Hills belong to me. If the whites try to take them, I will fight.” They demanded government officials honor the treaty.

Government officials interpreted Lakotas’ refusal to sell their lands as hostility. They stopped trying to keep miners out of Lakota lands and in December 1875, told Lakotas to report to authorities or expect war. Sitting Bull and his friend Crazy Horse were 250 miles away and probably never heard the order, but even if they had, such a journey was impossible to make in a South Dakota winter. The next summer, Sitting Bull pulled together from a number of different tribes the largest encampment of warriors in Lakota history, as many as 7,000 people, while the army set out to put them down.

In late June 1876, several of the twelve companies of the 7th Cavalry, commanded by General George Armstrong Custer, fell on the Lakota while they rested in midday by the Greasy Grass River, known to the army as the Little Bighorn. Custer died, alongside 267 other soldiers. The Lakota and their allies lost about 40. “I feel sorry that too many were killed on each side,” Sitting Bull said, “But when Indians must fight, they must.”

The Treaty of Fort Laramie required that three-quarters of Lakota men must ratify any further land cessions, but in the aftermath of the “Battle of the Little Bighorn,” the U.S. government simply seized the Black Hills. Then, in 1889, eager to open up land for eastern settlers in the new state of South Dakota, the government got Lakotas to sign significant land cessions, although exactly how they got those signatures is unclear, since the Lakotas had refused to sell the same land a year before.

Still, South Dakota was terribly low on both settlers and water, and it did not prosper. By the early 1920s, an early settler and the founder of the state’s historical society, Doane Robinson, decided to have a western hero carved into the Black Hills to attract tourists and boost the economy. He invited sculptor Gutzon Borglum to design it. Borglum rejected the idea of a western hero and instead designed a monument to represent American ideals: Washington, who had founded the nation; Jefferson, who had expanded the country west; Lincoln, who had saved the nation; and Roosevelt, who had protected democracy from industrialists.

Deep in the heart of the land the Lakota held sacred, Borglum carved a monument that, according to his son, was intended to illustrate that “Man has a right to be free and to be happy.”

It is hardly the fault of Washington, Jefferson, Lincoln, and Roosevelt that a desperate western promoter used their images to fix a problem created by party politicians. Trump’s attempt to link that early twentieth-century effort – and the violent history that preceded it – to the better aspirations of our greatest leaders is a sleight of hand. If we permitted it, that dark and angry equivalence would wipe out our history, indeed. 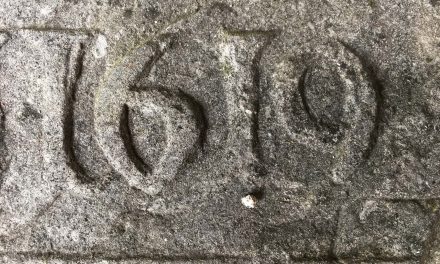 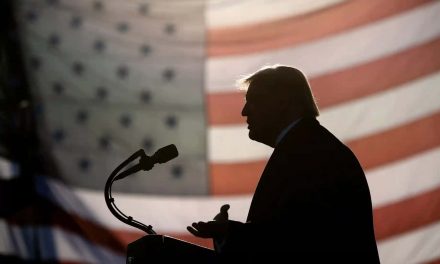 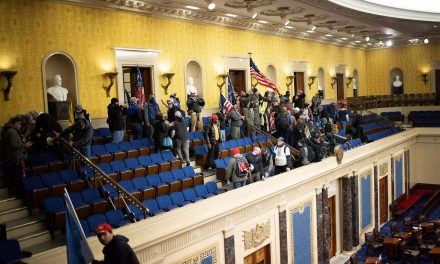 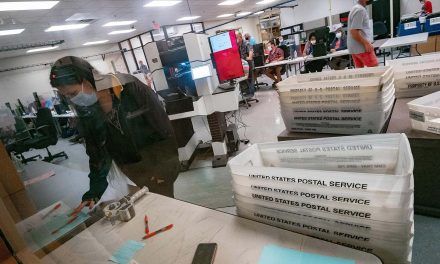