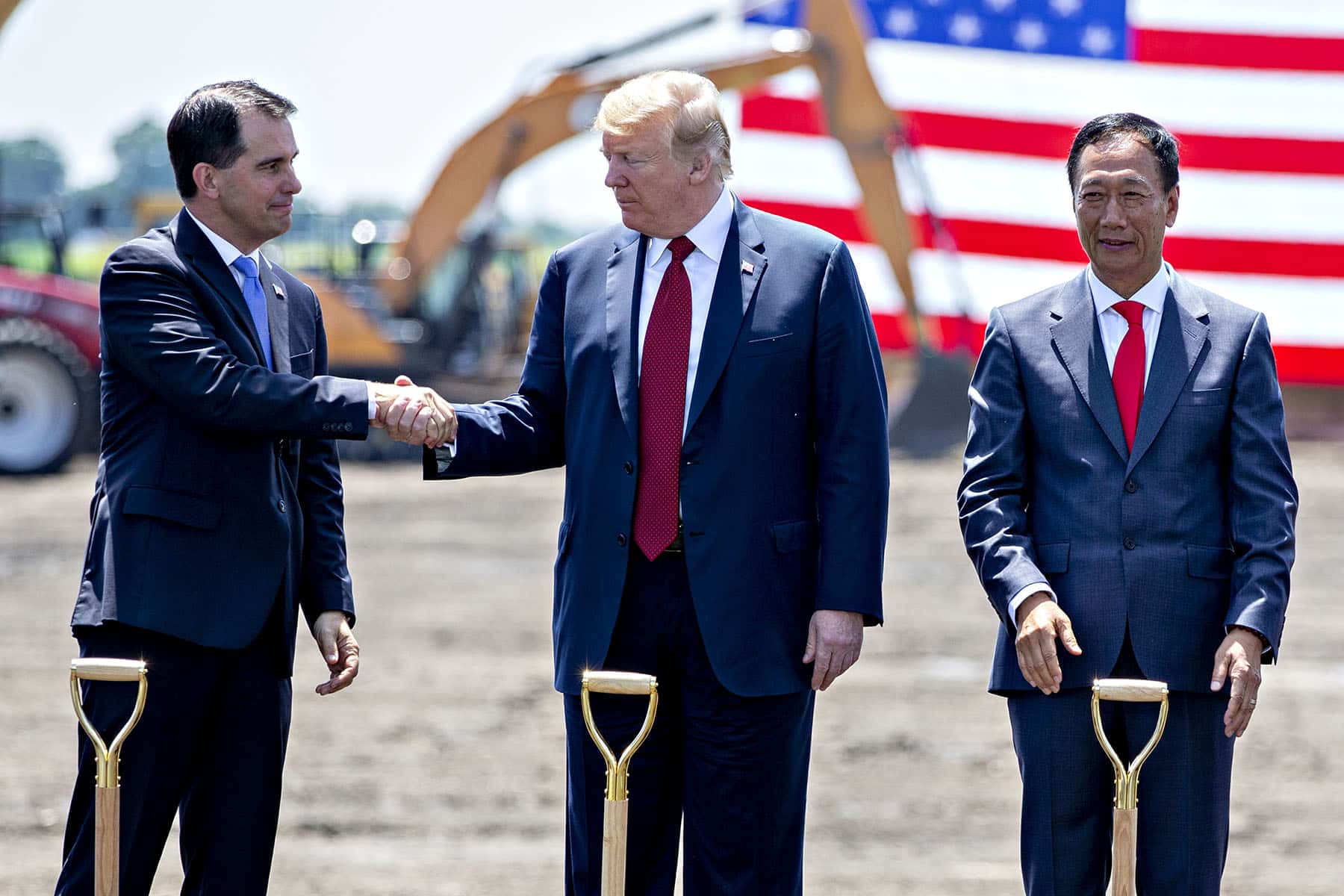 State tax credits for Foxconn’s Mount Pleasant operations — once pegged at potentially $3 billion — appear increasingly unlikely. But even without them, the Taiwan-based company’s installation in southeastern Wisconsin will carry a hefty price.

The most recent audit report from the Wisconsin Economic Development Corp. (WEDC) on the tech company’s 2019 job-creation record all but extinguished the prospect for the company to get a payout through the controversial deal reached under former Governor Scott Walker.

“The reason why the 2019 credits were rejected was because they’re not in compliance with the contract,” state Representative Gordon Hintz (D-Oshkosh), the Assembly minority leader and a member of the WEDC board, said. “Meaning, they’re not only not eligible for 2019 — but the decision is they will be ineligible for any money going forward.”

The contract, reached between the state and the technology manufacturer in Walker’s last year in office, specified that in return for the tax credits Foxconn would manufacture Gen 10.5 liquid crystal display (LCD) flatscreens at the Mount Pleasant plant, employing as many as 13,000 people. That project was shelved while the company offered one, then another, plan for the site.

At one point the plan was said to be for Gen 6 LCD screens — not the same as those in the agreement with the state. More recently, the company said it would make ventilators at the site, demand for which has gone up as a result of the COVID-19 pandemic.

The prospect remains on paper for Foxconn and WEDC to negotiate a new contract. WEDC CEO Missy Hughes reiterated as much in her cover letter to Foxconn vice chair Jay Lee that accompanied the agency’s October 12 audit report rejecting the tax credits.

But Hintz and other Foxconn skeptics said on October 20 that they do not expect that to come to fruition.

Hughes’ predecessor at WEDC, Mark Hogan, “said that Foxconn would really need to renegotiate the contract” in 2019, Hintz said. So did Joel Brennan, secretary of the state Department of Administration, along with Hughes.

“They’ve known this for 16 months,” he said of the Foxconn executives. “The ball has been in their court since then, if they’re interested in incentives.”

Just a shell or substantial progress?

The Verge, an online publication covering technology, recently published a definitive report that reinforced what critics have said about the entire project, particularly its demand for subsidies from both local and state government.

According to The Verge, starting in January of this year, Foxconn laid off as many as half of the 580 employees that it had recorded by the end of 2019 and listed in the report it submitted April 1, 2020, to WEDC applying for job-creation tax credits under its contract with the state.

Two years after a groundbreaking ceremony that included Walker and President Donald Trump, who took credit for persuading Foxconn to set up shop in southeastern Wisconsin, the buildings the company erected on the Mount Pleasant site “are largely empty,” the story said.

So-called “innovation centers” the company boasted of establishing around the state remain vacant, as they have been since The Verge previously reported on them. “The heart of the project, the million-square-foot ‘Fab’” — the building originally identified as the site to fabricate the Gen 10.5 screens — “is just a shell,” The Verge stated, and has now been reclassified as a storage rather than a manufacturing building.

“With over a half billion dollars invested and four buildings either completed or under construction, we’ve seen substantial progress at Foxconn’s Racine County campus,” read a statement from Racine County Executive Jonathan Delagrave. “Racine County has already experienced an array of benefits and new growth due in part to the Foxconn development, including a number of new housing developments, two announced new hospitals, upgraded water and sewer infrastructure and expanded I-94. Foxconn continues to meet its financial obligations under the local contract, having become the largest taxpayer in the Village of Mount Pleasant. We also recognize COVID-19 has impacted all of us and Foxconn must be responsive to demand and changing economic and market conditions. As we all adjust to new realities and confront a long economic recovery from COVID-19, Foxconn will be a big part of Racine County’s future and we remain focused on positioning our businesses and residents for success.”

On October 19, Foxconn founder Terry Gou issued a statement that cited “market conditions and the COVID-19 pandemic” for changing “the timing of our expansion, the specifics of our manufacturing plans, and our product lines.”

He declared, as has been his habit to make PR claims that do not prove true: “Foxconn will remain committed to the completion and continued expansion of our project and investment in Wisconsin as long as policymakers at the federal, state, and local levels remain committed to Foxconn and the very important technology development goals driving the company’s investments, as President Trump has done.”

But exactly what Foxconn is doing on the site is still not clear. The company did not respond to a request to answer clarifying questions. In a joint statement October 12, the day that WEDC announced the company would not get tax credits on its 2019 jobs, Delagrave, Mount Pleasant Village President David DeGroot and Racine County Economic Development Corp.’s executive director, Jenny Trick, intimated that Foxconn’s original Plan B, to make Gen 6 screens, was still its intent. In the statement, the three said they “are disappointed in the state’s decision to not support the creation of the Gen 6 facility and Foxconn’s significant investment in Wisconsin.”

The Verge reported that there were no signs that LCD screens are being manufactured, and that in a WEDC survey that asked employees what they were making, no one mentioned LCDs. Employees told the publication that they have recently been making computer servers. The Verge report also pointed out neither employees nor Wisconsin state officials have been able to identify where the company is making the ventilators that it reported it was manufacturing.

WEDC’s Hughes indicated in her October 12 letter to Lee, the Foxconn vice chair, that the company’s plans have still not offered sufficient detail to allow the agency to create an incentive package.

State Senator Tim Carpenter (D-Milwaukee), who sits on the Senate Committee on Economic Development, Commerce and Trade, says he would like to see hearings next year delving into the details about the Foxconn project.

Even though the state hasn’t had to pay for the tax credits, the project has incurred an estimated $800 million in other costs, from infrastructure development to buying up homes for the factory site from local residents who didn’t want to move. The state might still have to cover the local municipal bonds used to finance the project, if a tax-increment financing plan for the site falls short of projections.

Instead of the extensive subsidies for Foxconn, Carpenter said, “we would have been better if we just contributed to small businesses that were already in Wisconsin.”

State Senator Chris Larson (D-Milwaukee) interpreted Gou’s statements and its references to Trump’s role in encouraging the project as a signal that, if Trump lost the November 3 election, the company would abandon the project. At his recent rally in Janesville, Trump himself implied that he would need to be re-elected for the state to get a new deal with Foxconn.

State Representative Jonathan Brostoff (D-Milwaukee), among the earliest and most outspoken Foxconn critics, said the project was never more than “a last ditch campaign stunt” by Walker for his 2018 campaign and Trump to win Wisconsin in 2020.

Hintz suggests that Foxconn’s real motive in coming to Wisconsin in the first place might have been simply to persuade Trump to back away from a tariff on electronic manufactured goods imported into the United States.

“Within 48 hours of the announcement on Foxconn, [the Trump administration] said they were no longer considering tariffs on electronic imports,” Hintz said. “So Foxconn was able to make an announcement that ensured their number one consumer market would remain open.”

Whether or not that turns out to be the real story behind the deal, Hintz believes that the experience has made the state “pretty shy about entering into these kinds of single-company-focused” development transactions.

But what happens next “is really up to the company” — whether it will renegotiate for “a scaled back, more realistic R&D [research and development] project,” he says.

“At some point,” Hintz adds, “I think people need to realize that this is a company that’s willing to lose money, and then ask the question, what’s their goal?” 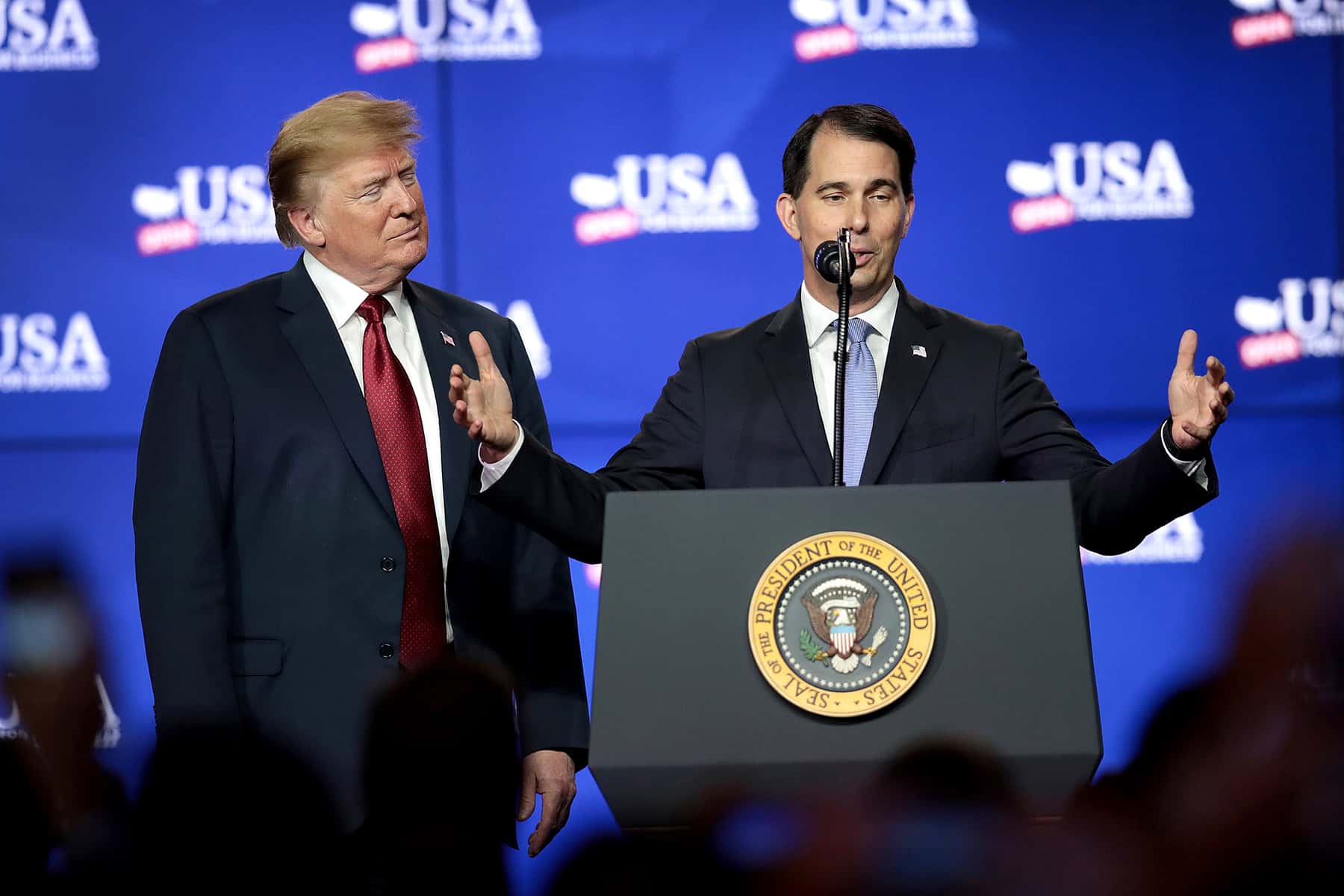 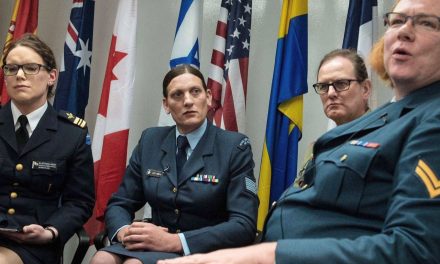 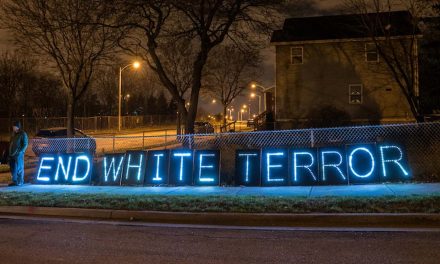 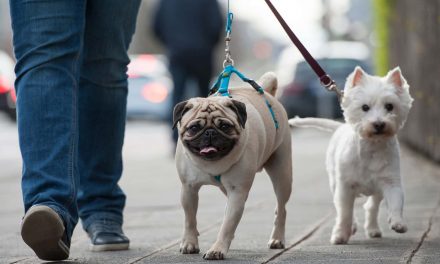 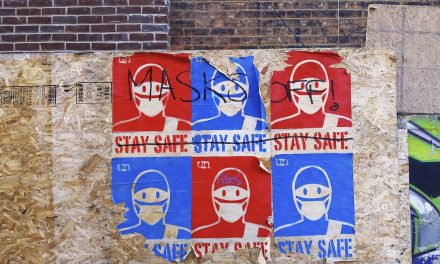